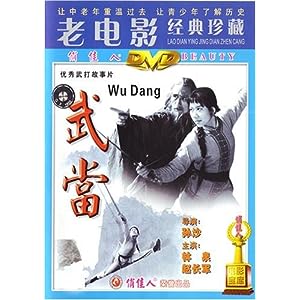 The People's Republic of China were late commers to the Kung Fu film fray. Their initial entry was 1981's The Shaolin Temple which featured the film debut of an eighteen year old Jet Li. It was a huge hit and started a whole slew of period martial arts films from the "homeland". Plotwise, these films were for the most part, retreads of the previous decades' kung fu epics that were produced in Hong Kong and Taiwan. There was very little originality going on here. On the positive side however, there were actual China countryside locations which gave these films a certain majestic sweep that had largely been absent in the previous decades' city lensed releases. This combined with the use of actual martial artists (Wushu experts, all) managed to give these epics a very different and welcomed vibe to what fans at the time were accustomed to. This film, 1985's Undaunted Wu Dang is one of their best.

The story is simplicity itself and all too familiar to long time fans of the genre. Mean, nasty Japanese Judo experts visit China and challenge the local's best fighters to a tournament. The Japanese win handily until a revered Wu Dang master steps up and defeats them. This doesn't sit well, so the Japanese fighters later ambush and poison our hero (not the most gracious of losers, are they?). His lone daughter seeking revenge (naturally)  heads to the mountains to visit her uncle, another Wu Dang master who lives a hermit like existence. After teaching her some vital tricks of the trade, our heroine heads back to challenge the Japanese and lay a Wu Dang smackdown on their Judo asses.

Director Sha Sun keeps things noteably subdued, here (and thankfully minus the comedic scenes that peppered several early Mainland productions). Everybody is quite stoic and even the Japanese baddies keep things for the most part low key (contrast this with the over the top presentations in so many Hong Kong bashers of the early 70s). While this is a refreshing change of pace, I'm not sure I'd want this as the norm for my kung fu movie viewing. Part of my love for this genre is it's over the top presentation, both in the actors/characters as well as in the often extreme action and violence. The underplaying of the roles causes the actors to seem arguably less personable. The fact that most of them were martial artisits first and actors second likely contributed to this as well. It is overcome however by some truly unbelievable displays of wushu combat. The flips, twists, punches and kicks on display here are absolutely mind blowing. The fight sequences look much more fluid and less choreographed than what I have come accustomed to seeing. Watching what these wushu artists are able to accomplish so effortlessly with their bodies is a humbling experience.

Overall, Undaunted Wu Dang with it's authentic period detail. magnificent mountainous scenery and mesmerizing displays of wushu style martial arts comes highly recommended to jaded kung fu film fans. I personally may not actually prefer this to the best of the  stage bound Shaw Bros. epics, but I'll definitely take it over the likes of Crouching Tiger Hidden Dragon any day of the week!


Posted by Films from the Far Reaches at 1:44 AM

Email ThisBlogThis!Share to TwitterShare to FacebookShare to Pinterest
Labels: China