Tiger From Hong Kong (aka 72 Hours in Green Town) 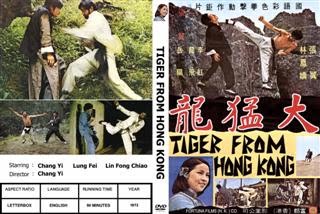 
Chang Yi is one of those actors who seemed to be around forever in the world of Hong Kong cinema. Starting out in the mid-60s playing parts (both heroic and villainous) in various Wuxia pictures before graduating to the empty hand martial arts films of the 70s.and early 80s (he is particularly memorable as the baddie in Sammo Hung's great martial arts/comedy/drama, The Victim). Never achieving superstar status, Chang managed to make each of his roles a memorable one. His looks and demeaner seem to be a better fit for playing the heavy (as was the norm for nearly all of his later pics) but under the right circumstance, he could play a convincing hero (in the brooding Spaghetti Western sense). Case in point, 1974's Tiger From Hong Kong.

Here Chang Yi (with rare facial hair) finds himself on the run, falsely accused of murder. After escaping the authorities, he heads back to his old stomping ground and visits his on again, off again lady friend (played by the lovely Nancy Yen) only to find her now working in a Brothel (price paid for not making her an "honest" woman, I suppose). Defending her against the local gangsters, he soon finds himself at odds with them as well as being dogged by a (similarly bearded) "special agent" who's looking to bring him in.

I unexpectedly found myself getting pretty involved with the story and characters. Credit Director Wong Shut Ching for keeping the well worn plot fresh and drawing some three dimensional characters out of the proceedings. Nancy Yen is well cast as the beleaguered (and doomed) love interest. An accomplished actress and martial artist, Yen's role is disappointing only in that it is a non fighting part (no femme fighters in this basher, unfortunately), but she conveys her role as the quietly long suffering love interest with an admirable degree of subtelty. By downplaying her role, you really do feel for her character and Chang's rage at her murder at the hands of some decidely despicable villans is actually quite heart felt. I was unable to identify the actor playing the "special agent", but he nearly steals the film in what is a relatively minor role. His character could have easily been the star had it been told from his point of view as his screen presence may actually be stronger than Chang's.

Then there are the fights. This film having been made near the end of the Basher cycle (before Shapes took prominence),  features some excellent hand to hand (and foot) duels. Chang Yi carries his intensity as an actor over to his combat and by the time he (in a guilt ridden rage) confronts the nasties on a bridge at the climax, you know a major ass whooping is in store.

I'd be remiss if I didn't point out the excellent U.S. dubbing. It is far superior to that of the typical British (Australian?) dubbing that you would hear in most kung fu flicks (which among other things, offer up the reference 'But Still...' ad nauseum) and actually does enhance the drama (and therefor the enjoyment). Only a handful of films were dubbed here in the States with the only other one that comes immediately to mind being the very good "Queen Boxer" (starring Chia Ling). I wish more Chinese movies were dubbed in this Country.

Tiger From Hong Kong was a nice surprise. It is always a benefit when one of these early and similarly themed martial arts movies takes the time and care to create three dimensional characters to go along with the constant carnage. This one succeeded admirably and has quickly become a favorite of mine from this period.


Posted by Films from the Far Reaches at 1:36 AM