Secret of the Telegian (aka The Teleporting Man) 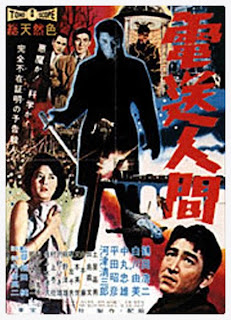 This is the bastard stepchild of Toho's "Transforming Man" series in that unlike The H-Man, The Human Vapor and Matango it was directed not by Ishiro Honda, but Jun Fukuda.

The story centers around a murderer named  Sudo,  a former Lance Corporal of the Japanese army who is seeking vengaence on his greedy and ruthless WW2 comrades who attempted (and failed) to off him during the war. Sudo's choice of weapon is a baynott, the same one that was previously used on him (poetic justice, anyone?). As the tale develops, we learn that he works as an assistant to a scientist that has created a Cryotron - a device that allows one to electronically teleport himself. Without his boss being aware, Sudo uses the futuristic device to appear and disappear, leading (understandably) to much police confusion

Fukuda plays this film as a murder mystery and while parts of it do elicit a decent air of Film Noir, it ultimately falls somewhat flat. Aside from the effective (and fairly gory for it's time) flashback sequence showing the betrayal of Sudo in a cave, there is nothing that really stands out here. The teleportation scenes are decent, but pale when compared to the effects in the previous years' H-Man (reviewed previously in this blog) or those of The Human Vapor which would be released just a few months later. Even the musical score by Sei Ikeno isn't a particularly memorable one (and memorable music scores are practically a gimme in the Toho Kaiju universe).

Secret of the Telegian (which for a while was available only in Black and White until an original Color print was ultimately found) is disappointing, but not completely without merit. It is well paced and features a couple of decent shock/surprise moments, but overall it is a second rate Toho entry which is recommended for completists and not the casual fan.


Posted by Films from the Far Reaches at 4:35 PM