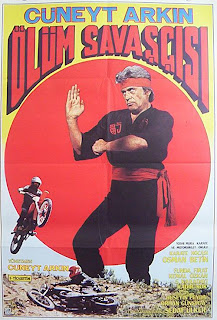 I may have just "jumped the shark" by deciding to review this movie...

In 1982, director Cetin Inanc and actor Cuneyt Arkin (one of filmdom's most notorious pairings) lensed Son Savascisi (The Last Warrior, also known as Holy Sword). This typically crazed Turk action fest featured the running battle between a gang of nasty, alchemy adept ninja and the similarly skilled, karate fighting cop, Inspector Kemal (the ever present Cuneyt Arkin). It apparently was a big hit locally, so much so that in 1984 a sequel commenced. That film, Olum Savascisi (Death Warrior) is not so much a movie as it is a cinematic stream of consciosness.

The story (?) involves the disciple of the slain Ninja leader from the previous film gathering a new and even more lethal army of supernatural warriors. Their intent? invade America (!). The local government is helpless against the onslaught of these beings (who among other things, can move objects with their minds, ressurect the dead and apparently have a Yeti like monster at their disposal... or not...). The decision is made that only a Turk can deal with them (naturally), so Inspector Kemal is enlisted to come to the good ol' U.S. and once again combat his by now familiar foes.

If the previous paragraph sounded cohesive in any way, then that's a great faux pas on my part for Death Warrior just maybe the most mind blowing and mind numbing (yes, simultaneously) thing that I have ever sat through (and multiple times at that). It is a mess-terpiece of the highest order. Is it the worst movie ever made or is it the greatest movie ever made? Well, yes to both. As familiar as I am with the patented Inanc/Arkin formula of the 1980s which tend to lean toward the crazy and the incomprehensible, nothing could possibly have prepared me for the 73 minutes of brain frying madness that is Death Warrior. I've never dropped L.S.D. in my lifetime but after watching Death Warrior, I feel that I understand what it would be like. Part ninja action flick and part Evil Dead inspired horror (the hilariously awkward zooming camera angles are most certaintly inspired by Raimi's groundbreaking film of the previous year), Death Warrior is as close to complete movie making meltdown as any you are ever likely to see.

But don't just take my word for it, here's the entire film (minus subtitles; it won't matter), courtesy of Youtube. You're welcome... and you've been warned.