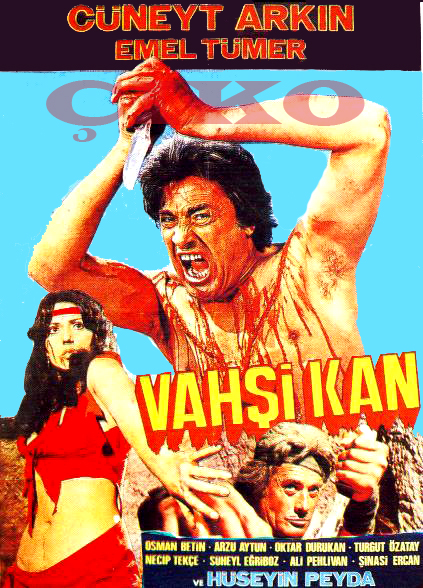 
Director Cetin Inanc has had a career that spanned five decades in his homeland of Turkey, covering all sorts of films (Action, Drama, Westerns). However he is best known (here in the West, anyway) for a series of wild and incredibly incomprehensible low budget films he did in the 80s with actor Cuneyt Arkin. The duo's most notorious work is The Man Who Saved the World (dubbed Turkish Star Wars as it actually lifted scenes from Lucas' epic). That however, was just the beginning of the cinematic assault on the senses (to say nothing of sensibilities). Here we have Vahsi Kahn. This film is more or less a remake of Stalone's First Blood, but with the distinct Arkin/Inanc stamp on it (meaning it's absolutely insane!).

Cuneyt Arkin plays Riza, a wanderer who is returning to his village home when he runs afoul of the local gangster's sadistic gang. Riza is harassed, captured and tortured until he freaks out (as only HE can) and escapes to the mountains. The army is sent in to find him. The head gangster wants him dead because of what Riza had done to his son. The "son" is a crazed, bloodthirsty quadripolegic whom the father has hidden away (once seen, this character will not be easily forgotten). Eventually, Riza encounters and befriends a woman (played by regular Inanc/Arkin alumni Emel Tumer) who is the survivor of earlier massacre, courtesy of said gang. Her character is murdered, sending Riza into even greater rage (if that were possible).

The rest of the film is full of wild, crazed, over the top action, combined with awkward edits, bizarre close-ups and disorienting camera angles. In other words, your typical Inanc style action. As always, Cuneyt Arkin is a one man army. A real life Black Belt in Karate, Arkin may not look pretty but when it comes to bigtime butt kicking, he has no peer.

Several years later, Inanc would revisit this material with Korkusuz, a Rambo remake. More to come on that one...


Posted by Films from the Far Reaches at 2:19 AM