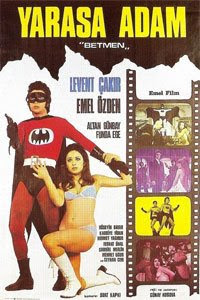 
The 1966 camp classic Batman series had a profound effect on the world movie market. The Phillipines had several eye opening variations, including James Batman. This combined both the Batman and James Bond characters (both played by local comedic actor Dolphy). In 1991, the Phillipines struck again with the far less entertaining Alyas Batman and Robin. In 1968, Mexico released Bat Woman which featured the breathtakingly beautiful Italian actress Maura Monti fighting crime and monsters while wearing a purple cowl and cape with matching bikini. In 1990, South Korea unleashed Super Batman and Mazinger V which combined live action with crude anime.

The most jaw dropping of them all (at least of those so far discovered) was Turkey's Bedmen Yarasa Adam. This 1973 black and white sleezey, no budget action masterpiece delivers more thrills in it's scant sixty two minute running length than all of Hollywood's Batman films combined. This dynamic duo are not only hired detectives, but a pair of voyeurs who drop by nightclubs between assignments to watch the local strip acts. The wild eyed look on Boy Wonder's face while watching the topless hotties perform leaves no guesswork as to what's on his mind. Sadly for him, it's the Caped Crusader who gets all the action. This includes doing the "Batusi" with his regular girlfriend AND cheating on her regularly with strippers and any other lovely that he can get his bat mits on. However, it's not all fun and flesh as an evil criminal organization (more closely resembling Bond villians than your typical Batman baddie) wants to do in our oversexed heroes by murdering their women (I'm sure their's more to it than that, but my print is without English subtitles)! This leads to some great fight scenes; some of the best that I've yet seen in a Turkish action film. They are wildly acrobatic encounters that are reminicent of Italy's Three Supermen adventures.

Bedmen Yarasa Adam is great stuff from beginning to end. It's as enjoyable an hour of pure, cheap thrills as you're likely to spend in front of the (Bat) screen.

On a sidenote; the Batmobile (cough!) here is merely an ordinary convertible. This in itself is not unusual for one of these Turkish no budgeters, but it did lead to a moment that caused me to hit the reverse scan button. Our dynamic duo (dressed in street clothes) catch up to a carload of crooks. The heroes leap out of their car, instantly in costume! That's either a great trick or terrible editing. I'd rather think it's the former.

On another sidenote, there's also a (so far) lost Turkish Batwoman film called Ucan Kiz. Apparently (judging by it's poster art), our heroine is topless. This film needs to be found...

Posted by Films from the Far Reaches at 9:54 PM