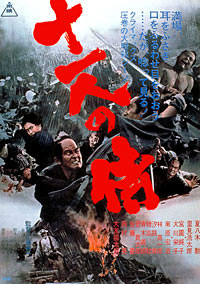 Director Eiichi Kudo is hardly a household name, even to fans of Samurai cinema. His career has spanned decades, hitting many peaks and valleys. He didn't even want to direct period samurai films, feeling he wasn't experienced enough in the field. His preference was directing often quirky, modern Yakuza pics. Regardless of his insecurities with the jidai geki genre, he churned out a trio of gripping films that can be considered among the best sword movies ever produced; 1963s Thirteen Assassins, 1964s The Great Melee and 1966s Eleven Samurai.

Shot in gritty black and white, Eleven Samurai tells a seethingly bitter story involving the despicably arrogant (and quite cowardly) brother of the Shogun who while out on a deer hunt, crosses over his boundaries and shoots an arrow into the back of a farmer who was in his way, killing him. When the local clan's lord repremands him, the Shogun's brother kills him as well. To cover up his heinous act, he turns the blame on the slain clan lord, placing the clan's future in jeopardy. The clan then decide to secretly send eleven of it's best samurai to plot and (with the help of a sardonic ronin) ultimately attempt to ambush the half crazed Shogun's brother. Of course, things don't always go according to plan...

Though it breaks no new ground, this is one of the more harrowing samurai tales I've seen. It pulls no punches in it's depiction of the depth of the hierarchy's hypocrisy and the anger, frustration and despair suffered by the samurai is palpable. Of course this does well to fuel the action scenes and the twenty minute finale (which like it's title, echoes Kurosawa's Seven Samurai by being staged in pouring rain) is as savage and realistic a display of disorganized chaos as anything ever attempted.

Featuring a typically stirring score by the maestro himself Akira Ifukube, Eleven Samurai is an undiscovered classic that like director Kudo himself, deserves far more exposure than what it has been given up until now.

Posted by Films from the Far Reaches at 11:26 PM