Santo vs las Lobas (Santo vs the She-Wolves) 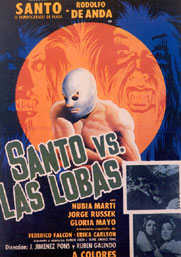 
This 1972 shocker is one of the most underrated and most atypical of the Santo pictures.

By this point, the Lucha Libre series was in a slow but steady decline, both in quality and audience interest (which of course go hand in hand). This one reflects the period, with it's faint made for T.V. Movie of the Week look. The werewolf makeup is also a hit or miss affair with some of the actors having hardly any lycanthrope makeup at all; as if there was no money left to properly dress them all up which was probably the case. There's also an uneven feel to the story itself. This is likely attributable to the fact that there are two credited directors (rarely a good thing in any type of movie).

Yet despite these flaws, "Santo vs las Lobas" still makes for strangely compelling viewing. This film contains a genuine feeling of horror and dread that cannot be found in any other Santo picture. In other wrestler vs monster films the monsters though always treated seriously, are never actually viewed with any genuine fear (well, not by me anyway). What we have here however, is an actual blood and guts horror film that just happens to feature a masked Mexican wrestler in it. It's almost as if Santo had been displaced in a Paul Naschy feature. The horror elemnts are surprisingly atomospheric and for once, you actually fear for our silver masked hero's safety.

The story concerns the appearance of Lucan and Luba, the king and queen of a satanic werewolf cult that have reappeared with their clan of male and female lycanthropes. Their objective (wait for it) is to conquer the world. Enter Santo, el en Mascarado de Plata who teams with a decendant of a family that once fought off the werewolf invaders to stop them. Added to the danger is that Santo himself was bitten in an early film attack and must defeat Lucan before the coming of the red moon or else he will join the ranks of said beasties.

Incidentally despite the film's title, it is mostly the male wolves that our hero combats.

Posted by Films from the Far Reaches at 12:45 AM