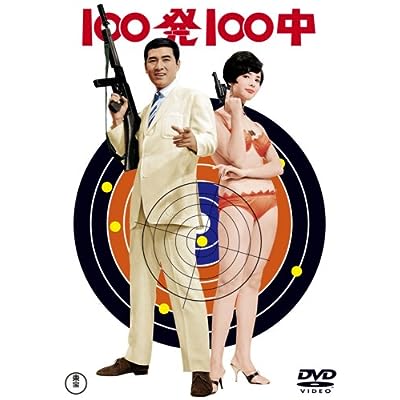 One of the pleasures I get from being a fan of rare foreign action/exploitation films is that no matter how long I've been a fan, something previously unseen and unheard of will suddenly appear out of nowhere. Such is the case with this 1965 movie, "100 Shot, 100 Killed".

This was one of Toho's 007 inspired capers. Most of these have never been seen by Western eyes, so I was especially shocked to come upon an English dubbed print! Most likely, it was an international dub job that never reached the states. It was retitled "Iron Finger" in an obvious attempt to satirize a certain Bond film that was released earlier in the year.

Directing the film was Jun Fukuda, the other Godzilla director. His work with the Big G was often loathed by purists, but he did do two of my favorites in the series, "Godzilla vs. the Sea Monster" and "Godzilla vs. Mechagodzilla". Here, he displays a cool, breezy style that he was likely best suited for. Watching this film, it's obvious that he was more at home doing this sort of thing than working in the Kaiju universe.

The cast is made up of plenty of familiar faces and it will be fun for Kaiju fans to see these actors for once, in something that doesn't center around a giant monster stomping around a miniature set. The two main stars are Akira Takarada and Mie Hama. Takarada gets the chance to really ham it up in his barely semi serious role as an Interpol agent. Mie Hama (playing an explosives expert) has never looked lovlier or sexier. She was one of my early childhood crushes after having gawked at her in "King Kong Escapes". Joining them as a third wheel is talented physical comedian Ichiro Arishima as the often put upon chief of police. Most in the U.S. will know Arishima as Tako in "King Kong vs. Godzilla". Also along for the ride is Akihiko Hirata as a double crossing agent (though admittedly, he's given little to do). They all give energetic performances as it's clear they had a good time working on the project.

Featuring a great shoot 'em up, blow 'em up finale and a fun music score by Masaru Sato (who scored everything from Godzilla vs the Sea Monster to Kurosawa classics like "Yojimbo" and "The Hidden Fortress") "100 Shot, 100 Killed" makes for solid, lighthearted spy movie entertainment. It may also give viewers some small idea of what "Key of Keys" was like before Woody Allen turned it into "What's Up, Tiger Lilly?".

Posted by Films from the Far Reaches at 1:34 AM