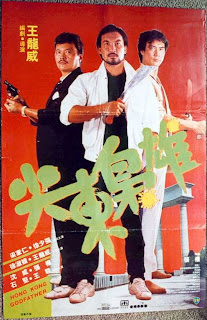 
By the early 80s it was clear that the Shaw Brothers studio, famous for producing some of the most celebrated martial arts movies was on it's last legs. Having been Hong Kong's box office champs throughout the 60s and 70s, they found themselves overtaken by Golden Harvest and their upcoming superstars Jackie Chan and Sammo Hung. These two (along with others) helped usher in the modern day comedy/action genre that became all the rage. The Shaws couldn't compete, they were suddenly seen as dinosaurs by as early as 1982. More's the pity since some of their finest films were produced during this period. Epics like "Five Element Ninja". "Legendary Weapons of China" and "8 Diagram Pole Fighter" couldn't make a dent at the local theaters (though all three are considered classics by fans here in the States). By the end of 1985, the mighty Shaw film cannon was essentially no more. They reverted to T.V. production and film distribution, but their movie making days were over.

One of the last (and until recently, toughest to find) films the Shaws produced was "Hong Kong Godfather", a modern day crime/action/drama that actually predated similar films by the likes of John Woo (who's groundbreaking smash, A Better Tomorrow was still a year away). Watched today in retrospect, it really is a shame that the studio folded as this film proved that they could have continued making genuinely great movies... if only there was an audience to go see them.

The director was Wang Lung Wei, one of the great screen villains of kung fu cinema. Stepping behind the camera for the first time, he displayed a surprising degree of professionalism here; never betraying his lack of experience.

This admittedly formulaic gangster drama about betrayal and revenge starts off slowly with lots of exposition. The first major skirmish doesn't take place until the 40 minute mark. But once it does cut loose, man oh man! There are moments of violence on display that are shocking, even to a longtime viewer like myself. There was a particular moment halfway through the film involving the Godfather's young grandson (who looks to be under 10 years old) that actually made me stare in disbelief over what I just saw. The highlight of the film is the ending and is it ever a doozy. A ten minute finale in a mall that is pretty much the last word in sheer brutality. Dozens are dispatched with knives and cleavers with blood spraying ever so freely. It's probably one of the bloodiest confrontations I've ever seen.

Incidentally if that shopping mall at the climax looks familiar, it should. Just a few months later, it was trashed by Jackie Chan in "Police Story".

Posted by Films from the Far Reaches at 2:10 AM