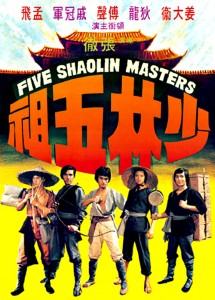 
This particular movie from Shaw Brothers studio is a special one for me. It was not the first kung fu movie I ever saw, but it officially kickstarted my 25+ year love fest with these films.

By 1983, I had already seen a couple of Bruce Lee's films as well as several lesser Lee-alike efforts. Then I saw "The Five Venoms" (aka Five Deadly Venoms) which was my first exposure to Shaw epics. I also saw "Shaolin Handlock" and a few others. For the next two years, that was more or less the extent of it. I considered them exotic novelties and didn't really dig that deep (having little idea just how deep this movie ocean went). Then in the summer of 1985, I picked up the book "Martial Arts Movies from Bruce Lee to the Ninjas" written by Ric Meyers, Bill and Karen Palmer and Amy Harlib. I couldn't put the book down. Something just clicked for me. And since many of them were now playing on T.V. I bought a bunch of blank videotapes and went to work big time on this genre. The very first one I taped was "Five Shaolin Masters". I could not have possibly picked a better introduction to these films, it was perfect.

Released in 1974, the story centered on the destruction of the Shaolin Temple by the Manchus and the escape, survival and ultimately the revenge of it's students. Many films both before and since have explored this story, but most of them tell stories of the two most famous survivors, folk heroes Hung Si-Kwan and Fong Sai-Yuk. This particular film however, told the story of five other historically lesser known, but no less important escapees who banded together with others to essentially form the makings of what would eventually become China's underworld (although this part isn't really touched on in the film).

From this premise, legendary director Chang Cheh and action choreographers Liu Chia-Ling and Liu Chia- Yung mounted a non stop action fest that put to shame much of what had come before. Though the choreography may appear a bit slow compared to what was to come some years later (this was after all one of the earliest "style vs style" attempts), it is still a lot of fun to watch now. Of the five masters themselves, David Chiang and Ti Lung were a very popular duo, co-starring in dozens of Shaw films over the past several years. Fu Sheng was a rising star who would soon prove to be arguably the most popular of all Shaw actors. Chi Kwan Chun was a young veteran of several previous Shaolin epics. Meng Fei had previously starred in several independently made bashers before appearing in this epic. The villains were a vrtual who's who of veteran and upcoming stars; Chiang Tao, Fong Hark-On, Liang Chia-Jen (who would later go on to become a popular heroic actor), Ngai Hung-Chik and most notably (and making his debut here) Wang Lung-Wei, who would go on to become Shaw's #1 bad guy.

Ironically in it's country of origin, this movie was considered the beginning of Chang Cheh's downfall as a director because it started his trend of stressing action over story and character development. Contrarily to  fans here in the States, it began his true ascension in the genre for precisely the same reason.

Five Shaolin Masters proved indeed to be the perfect introduction to kung fu movies and watching it again, it is just as thrilling and entertaining as the day I first saw it.

Posted by Films from the Far Reaches at 1:35 AM