People's Hero (aka A Public Hero) 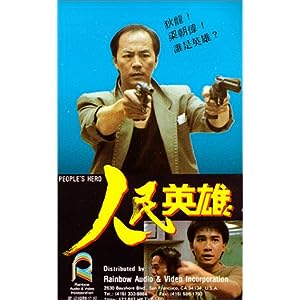 
With the mega success of A Better Tomorrow, long time star Ti Lung found his floundering career re energized and throughout the second half of the '80s, he was a much in demand actor for all manner of modern crime action/dramas. Though he never overtook fellow ABT co-star Chow Yun Fat in the popularity department, he may have actually recieved the meatier roles during this period, albeit in decidedly smaller films. This one, 'People's Hero' which takes it's inspiration from 'Dog Day Afternoon', is one of the best examples of that.

Tony Leung Chui Wai and Wong Ban play a pair of bumbling would-be bank robbers who out of desperation, attempt a moring heist. It almost immediately goes awry when Wong has an epeliptic fit. With things going south, one of the 'hostages', a notorious ex-con named Sonny Koo (Ti Lung) decides to take over the proceedings and use the situation as a means of negotiating to get his tough girlfriend out of prison (and she wants nothing to do with him). Things are further complicated by infighting between the sympathetic hostage negotiator (Tony Leung Ka Fei) and the cold blooded head detective (Paul Chun) who simply wants Sonny dead.

Clocking in at a lean 82 minutes and shot more or less in real time, 'People's Hero' is a tight and nearly note perfect thriller. I wasn't sure how I would feel about this movie going in as I was underwhelmed by Ringo Lam's highly regarded 'City On Fire' and was reluctant to give another non- John Woo HK crime flick a try (this was around 1990), but this tense, character driven film really did the trick for me. Director Tung Shing Yee is known mostly for his later, flashier, classier productions like 'Full Throttle' and 'C'est La Vie, Mon Cheri', but here he shows a mastery of gritty crime filmmaking that makes me wish he had revisited this genre more frequently (only recently has he returned to his roots with the surprsing 'Shinjuku Incident' starring a much cast against type Jackie Chan). The ensemble acting is all high caliber, led by the towering presence of Ti Lung who may have turned in the best performance of his career here. Initially intimidating, we learn as the film progresses that his Sonny Koo is not the heartless, cold blooded killer that he was portrayed as. It's an extroadinary perf and one that should have furthered his career. But when the film came out, it was up and coming co-star Tony Leung Chiu Wai as the in-over-his-head thief that received all of the accolades. This isn't the first time that Ti Lung found himself somewhat in the shadow of a young up and comer (see 'A Better Tomorrow' for the most notable example).


Posted by Films from the Far Reaches at 3:01 AM