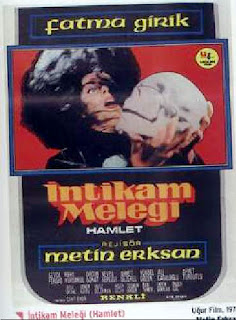 
Director Metin Erksan was one of Turkey's most celebrated directors throughout the '50s and '60s. He is responsible for some of that country's great fantasy dramas including, 'Yilanlarin Ocu', 'Suzuz Yaz' and 'Kuyu' for which he was named 'Best Director' (sadly, none of which have I had the chance to get acquainted with... yet). Here in the States, he is for better or worse known for his entertainingly cheesey 'Exorcist' remake, 'Seytan'. In 1976, he embarked on possibly his most challenging film, a modern reinterpretation of Shakespeare's 'Hamlet'... with a woman as the title character. I've had this film in my collection for over two years, but have not bothered to watch it until now. Having been so unfamiliar with Erksan's work, I went into this film expecting some awkward, yet hopefully enjoyably silly pic. I couldn't have been more wrong...

Attempting to translate the work of Shakespeare to film and not have one's self come off as appearing foolish is daunting enough. To do what Erksan has done here would seem like nothing less than an attempt at late career suicide. Low on budget with the majority of the movie taking place outdoors (including a beach retreat scene with 70s disco music playing in the background!), 'Kadin Hamlet' had the makings of a disaster on an epic scale. Yet somehow Erksan turns what easily could have been a complete embarrassment into an abstract work of art. Nearly every scene rings true to the original literary's intention and much of the visual sensibility is striking. I became completely engrossed in the familiar drama, realizing I was watching a master filmmaker in full command of his surroundings.

Still as tightly done and visually stunning as it is, 'Kadin Hamlet' would not have worked without a strong actress in the lead. enter Fatma Girik, a prolific actress (later turned politician) whose performance as Hamlet would make or break the picture. She attacks the role, lending it both the necessary intensity and sense of grandeur that was so vital to it's success. It was a completely convincing performance even during the 'mock' insanity sequences and staged musical section (which serves as the film's centerpiece). Girik's mastery in front of the camera equaled Erksan's work behind it.

'Kandin Hamlet' may not be 100% successful (it's a filmed interpretation of Shakespeare afterall; how could it be?), but it does make for compellingly bizarre viewing. It also shows why Metin Erksan was such a highly praised and revered craftsman in his home country. If he was able to make this material work so well, one is left figuring that he was capable of just about anything.