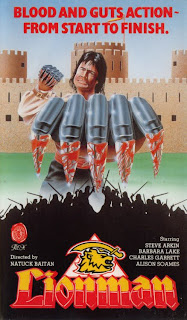 
I only recently started taking notice of just how many period pieces Cuneyt Arkin appeard in throughout the '60s and '70s. And from the ones I've viewed, they all seem to be lensed around the same wooded area and utilize the same castle. This isn't necessarily a bad thing. Afterall, I've seen countless Hong Kong Shaw Bros. films and have seen the same indoor sets I don't know how many times. This type of thing when it's visually pleasing (and in both cases, they are) can give off a feeling of comfortable familiarity. I've come to really enjoy Arkin's 70s period escapades, be it rumbling in the jungle or stormin' the castle. Of the many that I've so far seen, Lionman is the wildest and possibly the best.

The story: The King is murdered by a rival who assumes the throne himself. He also kidnaps the murdered majesty's child and unbeknownst to the kid, raises him to be his own son whilst keeping the mother locked away. A twin child however is led away to safety... into the jungle. There, he is essentially raised by lions until adulthood. Filled with superhuman beast-like strength (he literally roars) and discovering through a band of rebels his true heritage, our Lionman storms the castle and discovers his twin brother who in turn learns of HIS heritage from their captive mother (who is quickly 'silenced' permanently). The reunited brothers go after the illegitamte king (and murderer of both of their parents). During the fracas, the faux king douses the lionman's hands with acid. Barely managing to escape, our hero and his rebel friends make it back to their fort where the lionman gets a makeover from the local blacksmith; a pair of razor sharp, iron 'lion claws'. Now fully 'armed', our heroes return to the castle to settle some unfinished business with the faux king.

Veteran director Natuk Baytan keeps the way, way over the top adventure moving at a rapid (or more accurately, rabid) pace, even by normal Turk pop standards. Yet despite the blazing pacing as well as it's low budget and extreme cheeseball factor (the scenes with the our lionman both as child and grownup interacting via splitscreen with his lion kin is an absolute hoot), this film has an undeniably epic feel, no doubt due to it's authentic scenery and castle backdrop (which Baytan puts to great use here, despite the familiarity of it). The result is akin to a fever dream mishmash of period genres, served up in maniacally ridiculous fashion.

At the center of it is one of Cuneyt Arkin's most memorable roles (which is REALLY saying something). Showing no shame whatsoever and holding nothing back (as usual), he attacks the man/beast role with a crazed, over the top vigor (even by HIS standards) that must be seen to be believed. Most actors would shun doing such free spirited pantamime, but not our beloved Cuneyt. And as silly as his facial expressions tend to be, he still lends the part a level of power and authority that only he can. It's a perfomance for the ages (well, one of many from him).

Lionman is a must see for Turk Cult fans as well as action packed period cheese fest enthusiasts. It's easily one of the most entertaining from this genre that I've yet seen and may even displace Battal Gazi Geliyor as the perfect introduction to the insane joys of Turkish Pop Cinema.


Posted by Films from the Far Reaches at 2:25 AM