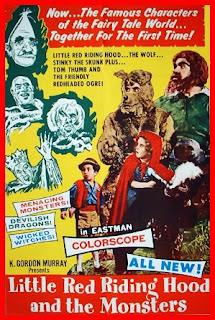 
Ooooh boy, where do I start with this one? This 1962 release was the third in a series of mind numbingly warped Mexican variations of the Little Red Riding Hood tale. Designed as a musical comedy horror tale for kids, it quickly developed a well deserved reputation as one of the most jaw dropping pieces of screwed up cinema ever made.

Here's the setup, kiddies; The Queen of Badness (who appears to have been inspired by both The Evil Queen in Snow White and the 7 Dwarfs and The Wicked Witch of the West in The Wizard of Oz) has gathered all the monsters in the world. Among them are the Vampire (which looks to have been modeled after John Carradine's Dracula in House of Frankenstein and House of Dracula), Frankenstein's monster, Bluebeard, Carrothead, Father Hurricane, the Siamese Twins and the Killer Robot (the same suit that was used in Robot vs. the Aztec Mummy and also appeared in Ship of Monsters). Their objective is to capture and kill the last two decent humans, Little Red Riding Hood and Tom Thumb. In order to lure them into The Queen's haunted forrest lair, they have captured two of their friends, the Ferocious Wolf and the Red Headed Ogre and are using them as bait.

The above synopsis cannot begin to do justice to the mesmerizing insanity that transpires during it's 85 minute running length. I have seen plenty of whacky films from South of the Border, but nothing to compare to this er, monstrosity. Just the way it opens alone is indescribably insane. The credits play as if it were a full blown horror film. The forboding narration only adds to the uneasiness. Then without skipping a beat, the monsters perform a musical number. The entire film plays like this. It's really quite something to behold.

To add to the madness, this was one of the Mexican fantasy films that was dubbed and imported by the infamous K. Gordan Murray. Murray had previously unleashed other Mexi horror movies as well as a couple of El Santo films (whom he redubbed Samson). Murray's dubbing always seemed like it was being broadcast from another galaxy. Well, K Gordon outdid himself with the Red Riding Hood trilogy by dubbing the many musical numbers that appeared in each film. These numbers were bizarre enough in Spanish, but when dubbed in Murray-English, they produce something approaching an out of body experience. The "highlight" are the numbers performed by Red herself (played by little Maria Garcia). Mr. Murray saw fit to dub her with what sounds like a 50 year old opera singer! It just may be the most disconcerting thing in the entire film (and that says a ton).

One thing that all will likely agree upon is that love it or hate it, there is absolutely nothing else quite like Little Red Riding Hood and the Monsters.

Posted by Films from the Far Reaches at 2:28 AM