The Rats (aka The Rats of Hong Kong) 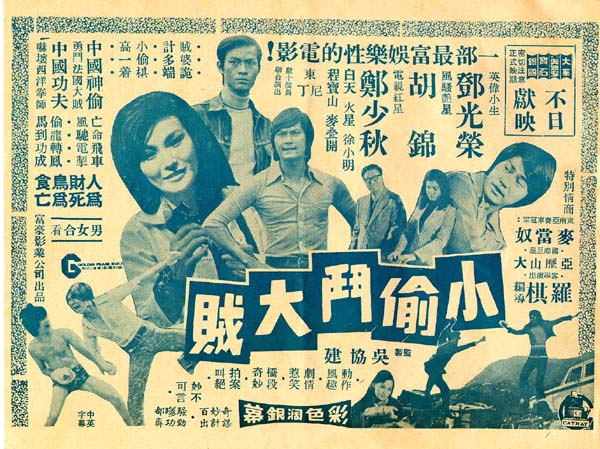 
This is a superior and ahead of it's time modern day action drama.

Set to a driving guitar riff, The Rats follows the misadventures of a gang of small time thieves. When not blowing what few dollars they have on women and gambling, they dream of that one big heist that would ultimately make them rich. That opportunity presents itself in the form of a major gangland exchange involving two gold filled cars. Concocting an impressive scheme involving a fake traffic stop, our "Rats" successfully acquire the golden autos. Not all goes as hoped however as they soon find themselves individually persued by the understandably irritated mobsters who themselves are being pressured into retrieving the gold by their even crankier American clients.

Lensed in 1973 and directed by Law Kei (who would later direct the positively insane Bruceploitation mess, The Dragon Lives Again), The Rats more than most other films from this period successfully manages to avoid the pitfalls of the subgenre and transitions it's modern day gangland story into an entertaining tale. Others from this period (even the good ones) tend to be grungy, depressing affairs with the emphasis on seedy and uninvolving melodrama. Here we are presented with a lively adventure that though downbeat, refuses to wallow in any of it's potential sweaty excesses. The main characters are all surprisingly likeable and personable and are given just enough character buildup to keep you caring about them without overdoing it. It is not action packed (the majority of the action being relegated to the second half), but it is consistently involving. When the action does come, it is of the fast and furious variety with several lively and energetic fights and stunts. Most surprising is it's car chases. They are ambitious and excitingly choreographed with the finale being on par with the best the genre has to offer.

The cast is an impressive one. Alan Tang (one of the more recognizable faces in early Hong Kong action cinema) plays the lead and has never been more charismatic. He is allowed a three dimensional role here and takes full advantage of it, projecting both power and vulnerability. Adam Cheng is so young here that he is practically unrecognizeable as Tang's second in command. I had a hard time believing that this was the same actor featured in Zu Warriors of the Magic Mountain and Gunmen. Future Jackie Chan alumni Mars is given more to do than in most other films I've seen him in and he practically steals the film. He is also the best fighter of this group so it's no surprise that his fight scenes are the most impressive. Being a stuntman, he is also given some amazing things to do on a motorcycle during the film's preliminary chase scene, possibly the highlight of the movie. The beautiful and ubiquitous Woo Gam is given arguably the choice part of her young career as the main gangster's treacherous squeeze/business associate. Her character is allowed to play off both sides with equal relish; belittling her partner for his carelessness and getting close to Tang only so that she can get him to devulge the whereabouts of the gold filled vehicles. It's a wonderfully juicy role.

The Rats really was a pleasant surprise. It manages to be both exciting and consistently involving while also being a genuinely fine piece of action cinema. It is one of the best Hong Kong films of the early 70s.

Posted by Films from the Far Reaches at 4:19 PM