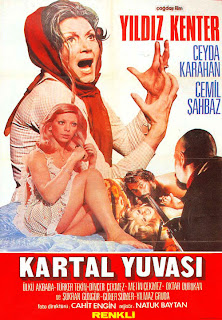 
When I first heard that there was a Turkish remake of Sam Peckinpah's Straw Dogs, I was in no way prepared for the bit of culture shock that awaited me. Though the basic theme of the original (meek person defending home against vicious locals) was present and many of the most memorable scenes recreated, there turned out to be far more differences in this version than similarities.

Filmed in 1974, Kartal Yuvasi was really a reinterpretation and that was likely out of necessity. Rather than being a meditation on the meaning of violence with no clear cut hero or villian, this version instead fed off local angst of the times. In this case it was about the conflict raging between Greece and Turkey over Cyprus with the Turkish Muslim community being forced out. During the making of this film, there was first a Greek military coup followed by a Turkish invasion. Director Natuk Baytan saw the uprising as the ideal backdrop for his Straw Dogs. Also out was Dustin Hoffman's character. Being that Turkey was at war, there was simply no place for a wimpy main character with questionable motivation. The solution was to replace him with... a woman and an elderly one at that!

The story starts with the arrival of a young Turkish doctor named Murat who has returned to visit his mother in his home in Cyprus along with his English fiance, Mary. Immediately, the good doctor is off to the hillside to aid a sick patient and does not return for the rest of the film. Left alone with Murat's mother, the two uneasy In Laws to be are almost immediately harassed by the brutish, ornery locals. The Mother you see is Muslim and is not welcome in the Catholic village. Things quickly escalate, leading to rape, murder and the eventual seige of the mother's house.

Throughout the movie, it is both the cultural and particularly the religious overtones which serve as the motivation behind the violence. This is encapsulated by Mary who is Catholic, but will convert to the Muslim faith for her husband. This as much as anything else, enrages the locals and gives way to her being raped by them. This scene is made all the more disturbing by the film's juxtaposing between this and a child birth being performed by the mother. And unlike the similar scene portrayed in the original, Mary clearly does not enjoy being raped (again, the characters in this version are completely black and white; not a shade of grey to be found here). During the climatic siege of her home, the mother defiantely reveals to the invaders that she is wearing the Turkish flag underneath her clothing. She also plays a record of Turkish marching band music (which actually resonates more than the bagpipe music used in the original). Just in case the Patriotic theme wasn't hammered home strongly and thoroughly enough, these climatic scenes are jarringly joined by edited footage of the Turkish invasion of Cyprus that was occuring during production! This elevates the proceedings to a truly hysterical level.

Kartal Yuvasi adds up to a pretty amazing viewing experience. It is a reinterpretation that can stand alongside it's filmic influence. It does admittedly come up short of Peckinpah's masterpiece, but it is still a harrowing slab of cinematic mayhem in it's own right.

Posted by Films from the Far Reaches at 1:41 AM