Heroine Susan, the Sister of the Shangtung Boxer 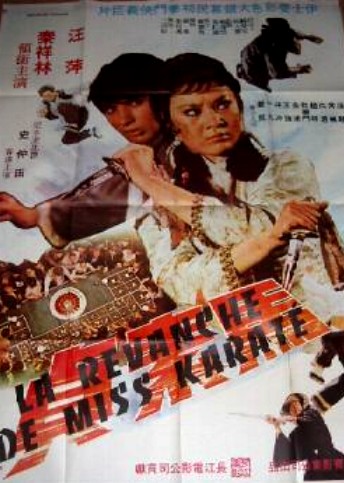 
Here's an unofficial, independently made sequel to the classic Shaw Brothers epic, Boxer From Shangtung. The Susan of the title is actually Ma Su Chen, sister of Ma Young Chan and a real life freedom fighting heroine whose exploits have been documented in many a kung fu move over the years.

As the credits roll, the film begins with a recreation of the climax of Boxer From Shangtung with the Ma Young Cheng charater receiving his bloody demise via axes to the chest and back. Arriving in town, Ma Su Chen learns of her brother's untimely demise. Unfortunately, the town is too frightened to speak out against the viscious gang behind the murder and who are now ruling the land, so to speak. This forces Ma to go undercover as a man (a comon and consistently unconvincing thread run through the Ma Su Chen films in particular and many 70s kung fu movies in particular). As she and her likeminded rebel friends learn the truth, the bodies start piling up.

Heroine Susan is in a word, disappointing. Wong Hung Cheung's direction is fairly flat and the martial arts choreography is some of the slowest and poorest I've seen from a 1973 production. There are times when a fighter can be seen throwing a punch or kick so half assed and so off it's mark, that it looks more like a blown outtake. It does attempt to pick up some steam at the very end with the inclusion of a pair of outlandish mercenaries hired by the baddies. One is a samurai and the other appears to be an American Indian! Unfortunately, their fights at the climax aren't much better choreographed than the feeble battles that preceeded them.

This is especially a shame since the performances are all quite good. In the role of Ma Su Chen, Wang Ping is very engaging. After watching her do almost nothing but cry throughout King Boxer, it is nice to see her in a lead fighting role. She's no Angela Mao or Polly Shang Kwan, but she clearly is trying her best and her pretty face is displayed well (making her male disguise scenes all the more ludicrous). It was fun to see a young Charlie Chin playing Ma's sidekick. I had gotten used to seeing him mostly in comedic roles in Sammo Hung films of the 80s (My Lucky Stars, Eastern Condors) with the big exception being his chillingly villianous turn in On the Run. His performance here is good, but not especially memorable. Like Wang Ping, he does not appear to be the most accomplished of screen fighters (though again, this could be attributable to the poor choreography).

Ultimately, Heroine Susan exists now more as a curiosity for old school kung fu completists and it will likely come up short even for that crowd.