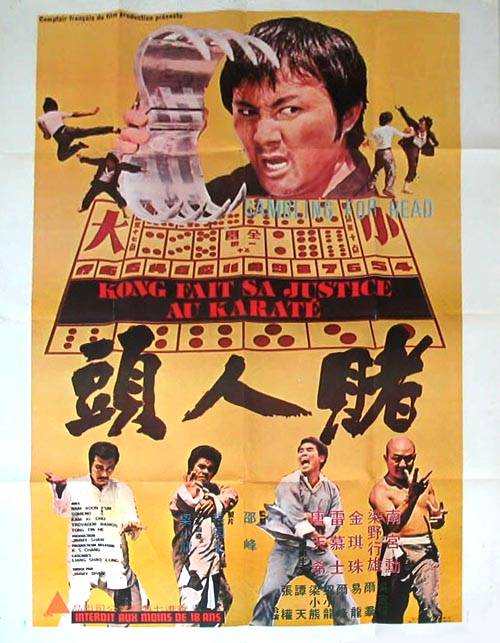 
One of the many consistencies of early 70s Chinese martial arts films is that they include a gambling scene. To this day, I'm not sure why so many of them did, other than to serve as a way to advance the plot (which I guess is all the reason that's needed). But it wasn't until this incredible 1975 basher was unleashed on the good public that the entire crux of the story revolved around the ever present gambling den.

Gambling for Head tells the story of a poor fisherman whose wife dies giving birth to their child. Broke and jobless, he leaves his son in the care of his best friend as he seeks help from his uncle who lives in another town. When the baby grows gravely ill and needs hospitalization, the friend resorts to visiting a gambling hall in an attempt to raise money. When he looses his last dollar, he resorts to offering his head as currency. He looses that bet, too... Upon returning home, the fisherman finds his child dead and his friend murdered by the casino owned thugs (yes this is one DARK mamajama of a story). In a fit of understandable rage , he first murders the second, third and fourth in command (each a top fighter) and with their decapitated heads in a bag, marches to the gambling den to confront the boss.

Director Jimmy Shaw films the first half of this ferociously grim revenge tale in a circular manner, ala Citizen Kane or Pulp Fiction. It is a surprisingly ambitious move on Shaw's part and he manages to successfully pull it off. Throughout the first thirty minutes, we see our hero face off individually against a trio of his enemies. During each fight, there is a either a cutaway or splitscreen mirroring an incident at the casino which we have yet to see. It isn't until after these battles that we then flashback showing the full, horrific incident involving his friend at the casino (and some of this is indeed tough to watch). For the final thirty minutes, we are then brought up to speed as the enraged fisherman confronts the main boss. Though initially this technique may be a bit befuddling for first time viewers, it builds dramatically as a result and by the final freeze framed image, one is left feeling drained.

Starring in this harrowing film was "Mr. Rage" himself, James Nam. As I mentioned in my review of Thunderbolt Fist, few (if any) can convey anger and hatred like Nam. Usually relegated to villainous roles, here he makes for the ideal avenging hero. This in addition to some rather ugly and scary looking baddies, fuels the fight scenes wonderfully. The final twenty minute plus confrontation is as savagely intense as any I recall seeing, further fueled by unusual (and nasty) weaponry (the head baddie's lackeys use claw like devices that clamp around the enemy's arms and legs).

Gambling for Head emerges as a top notch late period basher that is a must for genre fans.

Posted by Films from the Far Reaches at 5:57 PM