Monster Snowman (aka Half Human) 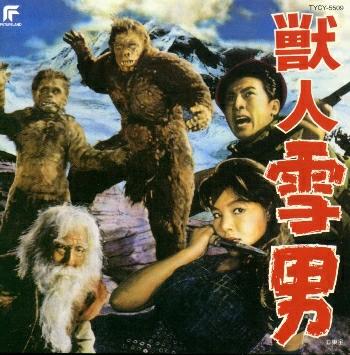 Toho's second ever Kaiju film and until fairly recently, one of the hardest to view in it's original incarnation. As had been reported ad nauseum, the film was part of a self imposed ban on Toho's part as it allegedly equated the films native populance with the Burakumin; lowly outcasts who have been linked to among other things, inbreeding. Though it was never made explicit, it was felt that it was close enough to be considered offensive and thus the ban hammer was lowered on the proceedings. Fortunately in recent years, a dupe started floating around the grey markets with a fan subbing following suit so we hard core collectors can finally see it as initially intended.

The story is told via flashback to a reporter by five members of a mountain expedition that came upon a primitive tribe who worship a a Yeti-like creature and his offspring. When a circus hears of the legend, they capture the passive and peace loving creature. When it's son attempts to free his father, it is shot dead causing the benevolent beast to become understandably enraged and quite vengeful.

Though not quite on par with the best of Toho's 50s output, Monster Snowman is well made and at times quite gripping. Honda does well to continually shift our sympathies; first towards our innocent snow beast who loses everything through the greed and callousness of man and then towards our adventureres who find themselves on the wrong end of the monster's blind rage. There are some really nice atmospheric sets on display and the design of the snowman and his son are excellent, by far the best ape design effects man Eiji Tsuburaya ever created (causing me to wonder just what the hell he was thinking with his various Kong designs some years later). Unfortunately because of the scale of the creature (roughly nine or ten feet tall), there were some issues when it came to scale. Most of the time it worked well but there was at least one instance that displayed a terrible traveling matte in order to make the suitmation appear larger than it actually was (traveling mattes were never among Tsuburaya's fortes). Fortunately, the effect was used sparingly. It was nice to see the stars of Godzilla reunited here. Akira Takarada was was in fine understated form though he got better in later years when his characters were allowed to loosen up a bit (particularly in Monster Zero and Godzilla vs the Sea Monster). Momoko Kochi allegedly was not happy working in the Kaiju genre and later would pursue and excell in a stage career. An intense actress, she brought a level of class to each of her too few film roles.

As with the original Godzilla and later Varan, American distributors got hold of Monster Snowman and eliminated much of the Japanese actors, opting instead to insert a home grown lead. In this case, it was John Carradine playing a scientist who also becomes our new version's narrator. He and his cohorts never leave the single tiny lab room in which they discuss and discuss... and discuss things we see in the film. Retitled Half Human, it is an exercise in deadly dulldrom that even the original footage can't fully enliven.

Regardless in it's original form, Monster Snowman is if nothing else arguably the best of the surprisingly numerous Yeti films of the 50s (ranking just ahead of Hammer's The Abomidable Snowman of the Himalayas). In it's US form as Half Himan, it's not completely without interest, but it's definately the worst of the Toho American re-edits (and those who have seen what was done to Varan will know just how weighty those words are).
Rating(s):
Monster Snowman - 7/10
Half Human - 3/10

Posted by Films from the Far Reaches at 4:18 AM