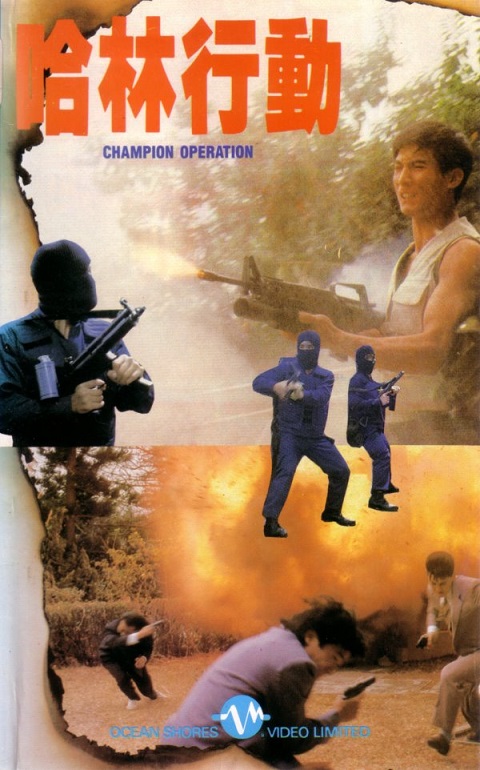 First saw this little spitfire of a film back in 1990 on an Ocean Shores vhs dupe (dubbed in English, no less) and I wasn't overly impressed with it. At that time, I was so enamored with the John Woo romantic slo-mo style of gun action that I just couldn't adjust to this type of thing which bore more of a resemblance to Johnny Mak's groundbreaking 1984 exercise in cold, gritty realism, Long Arm of the Law (a film I hadn't yet seen). It was a case of one-and-done. I stashed the thing away, forgot about it and eventually lost it (an unintentional casualty of my vhs purge of about ten years ago when I needed space just to walk around in my bedroom). Having gotten ahold of another copy recently, I now realize that sometimes when it comes to watching genre films, timing can be everything.

This tale of a running battle between cops, high profile gangsters and low profile Mainland immigrant criminals may be of slight budget (nowhere more apparent than in an early boat explosion that was quite obviously lifted from another film; reminding me of many a no-budget Turkish action epic from this period) and contains the absolute cheapest, cheesiest english credit sequence I have ever seen in a movie, but it has guts and energy to spare. Though the action comes fairly infrequently when it does come, it never ceases to shock and amaze. To wit; a mid-film police raid that feels almost hysterically out of control, a sudden and very nasty broken bottle shoved into a happless femme's face, several stunning chases including an extended car stunt which rivals anything done in the 80s (yes, Jackie Chan insanity included), solid 80s-style fight scenes (though not enough of these for my liking) and a properly explosive finale where no one is spared. In other words, when it's on, it's on.

It's interesting to see Suen Kwok Ming and Tang Ho Kwong together as they look so much alike that they could have switched characters mid-film and I may not have noticed right away. Both give energetic perfs and have just enough charisma to keep you interested in the proceedings when the action lets up. Norman Tsui however, is wasted in the role of the Godfather-like crime lord. I kept waiting for him to spring into action (something, anything), but his role is limited to essentially deep thoughts and heavy coughs. That's about it. His appearance alone is enough to give the character the proper amount of weight, but it really is opportunity lost, here.

Despite it's shortcomings which includes an extremely confusing final shot (did the events in the movie actually take place or was it being watched on T.V.? Huh???), Champion Operation shapes up as a grungy good time for the undemanding fan of Hong Kong action during it's peak period.

Posted by Films from the Far Reaches at 3:12 AM