The Righteous Fist (aka Furious Ultimatum) 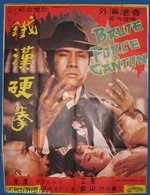 One of the best early Bashers I've seen yet. This is a genre that I've been catching up with as of late (having been exposed mostly to post 1975 kung fu movies for the early part of my life) and it has been an eye opening experience. Though this genre (like any other) has had it's share of clunkers, if you dig around long enough, you will find your efforts rewarded. That's already happened for me several times, many of which I've blogged about here. Then I come across a film like The Righteous Fist and the bar is unexpectedly raised.

Wong Yung stars as a C.I.D. agent who returns home under the guise of practicing medicine. His true motive is to arrest a notorious drug runner who has set up shop and is using his martial arts school as a front. He and his gang are also threatening to take over our hero's old school. Knowing of his true identity, the villians kidnap the agent's sister in order to force his hand. Adding to the situation is the presence of a traitor who is attempting to help the gang take over by framing our hero and discrediting him in the eyes of their teacher.

What we have is all the necessary ingredients for a successful early Basher; good school, vs bad school, good school's master's daughter in love with our hero, bad school hiring ringer in the form of a Japanese master 'with Hitler mustache', traiter in good school secretly working for bad school, main character learning the iron palm... but rarely has it all come together as sharply as it has here. Credit the inspired direction from genre vet Wong Hung Cheung for keeping things so lively and focused (contrast his work here with the lacklustre lensing he performed in the following year's Heroine Susan: Sisiter of the Shangtung Boxer).

Wong fills the film with unusal and sometimes unexpected flourishes. the 'learning the iron palm' sequence for instance, is shown in a very casual and innocuous way that lulls the audience into almost forgetting about it. This makes it all the more startling at the climax where our hero stabs his fingers into the various baddies, even through one unlucky bastards' hands (shown in gruesomely realistic closeup). Equally unexpected is the slain master's daughter and heroic love interest's (well played by Chiao Chiao) cathartic vengeance. Her character had been portrayed as well reasoned and under control throughout. Only during the finale where she finally catches up to the head baddie does she unleash her rage, stabbing the horrified king pin more than a dozen times with a knife. Wong also supplies the film with several peculiar character and situational quirks. The Japanese karate expert for instance is portrayed not as a huge and fierce warrior, but as a decidedly slight fellow with an apparent phlegm problem. It somehow makes his lethal skills seem all the more formidable (the slight build that is, the phlegm thing I probably could have done without). But by far the most bizarro idea comes late in the film. Just prior to the heroes' raid on the bad school, the decision was made to reduce their ranks by singling out and elimminating the biggest threat; a huge, nearly indestructable mountain of a man (portrayed by resident Hong Kong giant, Cheng Fu Hung) who's weakness is his propensity to get rip roaring drunk. Their way of getting rid of him? Why, by waiting until one particular night when he goes off on his own and gets especially smashed. Our heroes dress up as haunted zombie spirits and scare him literally to death! This scene, like the other bizarre moments is played absolutely straight faced. In a lesser effort, a scene like this could grind the proceedings to a halt, but here somehow, some way it works in spite of itself.

The Righteous Fist is a superior Basher and comes highly recommended.


Posted by Films from the Far Reaches at 7:32 PM