The Mercenary (aka A Professional Gun) 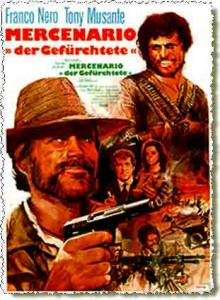 
It took nearly one hundred posts before I finally got around to reviewing a film from one of my favorite genres, the Spaghetti Western. In an attempt to come up with something semi-special, I'll review Segio Corbucci's The Mercenary, a film that until recently was only available in muddy Pan & Scan transfers. Finally a proper Widescreen print surfaced and now the film can be seen for what it is, one of the great director's finest films.

The Mercenary is part of the Spaghetti Western subgenre known as the Political Western which began in 1966 with 'Bullet for the General' (another top Spaghetti Western) and effectively reached it's finale in 1971 with Sergio Leone's 'Duck, You Sucker". Corbucci's entry though not as widely available (here in the States, anyway), is revealed to be every bit as vital and entertaining as it's better known brethren, if not more so.

Our film follows the adventures of  Sergei Kowalski (an excellent Franco Nero), a Polish mercenary who is hired by the treacherous Col. Alfonso Garcia (Edwardo Fajardo) to protect his shipments of mined silver. Along the way, he meets up with Paco Roman (Tony Musante), a mine worker and Revolutionary wannabe. They become tentative allies (Roman to liberate his people and Kowalski because he sees a way to make money in the deal). Further complicating matters is Curly (Jack Palance who admittedly is not given enough to do), a professional thief (and one who seems to wield considerable ploitical power) who is determined to steal the silver for himself.

I have been a big fan of Sergio Corbucci ever since I first saw Django (still my favorite of his and fave Spaghetti Western after Good, the Bad and the Ugly) and was ecstatic that The Mercanery was finally given the full dvd treatment. I now would rank this right up there with Django and The Great Silence as one of his three best. This was easily his largest production up to this point (the 'shooting down the plane' sequence alone looks like it was more costly than the entire budget afforded for Django). It is also his most impressive looking film and it is especially impressive that he tells this typically long and winding tale in just over half the length of time that Leone used to tell his epics and without any loss of character development or epic 'feel'. Corbucci also injects this film with a welcome dose of humor, something his earlier Westerns lacked. One especially memorable running gag is Kowalski's habit of using literally anything to strike a match (a man's teeth, a dead and hung man's boot, even a hooker's breast!). The highlight of the picture has to be the amazing duel in the bullfighting ring between Paco (in clown makeup) and Curly. Though borrowing a bit from the famed three way battle at the climax of Good the Bad and the Ugly, Corbucci still creates an almost unbearable amount of tension (both are forced to stand back to back as Kowalski hits a bell three times with the two being instructed to draw on the third gong). It is one of the great moments in the history of the genre.

Interestingly, Corbucci virtually remade The Mercenary two years later as Companeros (this time Franco Nero plays a 'Swede' as opposed to a 'Pole' with no discernable difference in the charater). Though that film ups the ante in both the action and humor while also giving the film a more downbeat finale (both films very much reflective of the 'times' and 'attitudes' in which they were made) it doesn't quite reach the majestic heights of his first 'Politico' piece.


Posted by Films from the Far Reaches at 4:51 PM

Email ThisBlogThis!Share to TwitterShare to FacebookShare to Pinterest
Labels: Italy