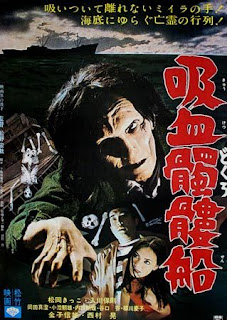 
Until fairly recently, this film existed as something of a legend in my eyes. Way back in the early 1970s at the tender age of 5 or 6, I picked up my first ever monster movie book. It was titled A Pictorial History of Horror Movies and became a huge reference book for me growing up. It detailed mostly classic horror and sci fi (very Universal heavy) from the silents up until the 1950s. Anything made in the 60s got little more than a passing nod. Even still, there were several photos from seemingly obscure movies that went otherwise unmentioned anywhere else in the book. One of these photos showed a maniacal skeleton menacing a terrified Japanese woman. It was identified as a film called The Living Skeleton and was released in 1968. That was it, no other mention of it otherwise. For decades, that one picture was my only reference. It wasn't until a few years ago that I became aware of the availability of this film. Once I finally saw it, I made a discovery; that picture is a publicity photo. Despite the title, there is no actual living, moving skeleton in the movie. My thirty five year plus perception of what this film is was based on false hype. This isn't some silly, freaky Kaiju at all. What it is, is a decidedly creepy and occasionally hair raising ghost story.

The opening scene is especially memorable. A group of pirates massacres a ship full of people in a callous heist. It is a surprisingly gruesome sequence for it's time as you genuinely feel for these poor souls (both men and women) as they are being mercilessly gunned down. Fast forward to where the pirates have split up and are enjoying the spoils of their cruel conquest with the scarred and bald leader (played by actor Atsushi Murakami of Latitude Zero and T.V.'s Ambassador Magma) disguising himself as a Priest, no less. However, visions of those whom they murdered seem to be dogging them. Are they being haunted by ghosts or are they merely imagining it?

The director is Hiroshi Matsuno and I've not found another film to his credit. It is very eerily filmed, so I would think he had directed more than this one effort. More telling perhaps is that this tale was penned by none other than Kyuzo Kobayashi of Goke - Bodysnatcher From Hell and Genocide - War of the Insects fame and this film definitely bears the mark of this unique writer.

Others have pointed out this ghost ship story's similarities to John Carpenter's The Fog. While it is possible that Carpenter saw this until recently obscure Japanese movie, I tend to think that it's just a coincidence. It would make for a pretty nifty double bill, however.

Shot in claustrophobic black and white and with a pervasive gloom and doom atmosphere as thick as the fog bound ghost ship itself, The Living Skeleton shapes up as stirring "tell me a scary story" fun that is worth seeking out.

Posted by Films from the Far Reaches at 2:13 AM