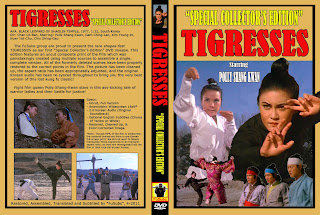 Here's a fun martial arts fantasy film from South Korea (yep, as soon as I complain about Korean martial arts films, I start seeing some good ones). It stars Polly Shang Kwan (aka Shang Kwan Ling Fong), an unheralded martial arts femme fighter. Polly had a long career that started in 1967 when she appeared in King Hu's classic Dragon Inn and continued in earnest until her retirement in 1980. Her appearances were many and varied. While she never achieved the legendary status of Angela Mao Ying,  she was just as important in the history of the femme fighter in Chinese martial arts cinema. In a way, Polly can almost be seen as the anti Angela. While Mao Ying was almost always intense and ferocious, Shang Kwan even when playing deadly serious parts, always came off as perky and spunky. Her enthusiasm for each of her very many roles leaps off the screen. It is quite obvious she gave every part her all and it is these attributes that have endeared her to long time kung fu movie fans. For this film Tigresses, she takes her considerable skills to South Korea.

Tigresses opens as a Great Lord is betrayed by his assisstant who has alligned himself with a group of mercenaries. His retainer helps his two young daughters (one a five year old, the other an infant) escape. They are split up to avoid detection. Fifteen years later, the elder daughter (Polly) returns to destroy the betrayer, now Lord of the land himself and claim the throne as it's rightful heir. Donning a ninja like outfit and calling herself The Black Leopard, she goes through his ranks of martial arts mercenaries. The first is a master of hypnosis. He is given a taste of his own medicine as he is first rendered dizzy by Black Leopard's leaping (flying, actually) ability before being killed by her Crane style fighting. The second fighter is a master of disguise and invisibility. She makes him visible by using her ability to emit smoke from her hands (!) and then proceeds to beat the stuffing out of him. The third is a weapons expert. He attempts to dispatch her by breathing fire (!!) only to be frozen to death when she emits freezing vapor from her hands (!!!) turning him into a block of ice. Out of desperation, a fourth mercenary is hired; a woman with skills that match our heroine's. However, it is revealed that she is her long lost sibling from the film's opening (which explains why the film's title is plural rather than singular). Reunited, the sisters confront their father's assassin and his guards.

Though the by the numbers plot is too obvious for it's own good, the film is saved by it's plentiful action scenes which while hardly the most realistic of confrontations (to put it mildly) are all fun to watch if you're willing to go along with it. The use of South Korean landscapes also lends a welcome bit of exotica to the proceedings, especially for those who have seen perhaps one too many kung fu epics from Hong Kong and Taiwan and want to see something that's visually a little different.

Posted by Films from the Far Reaches at 1:36 AM