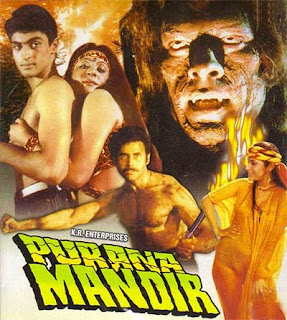 
Purana Mandir is one of the best and most important examples of Hindi horror, courtesy of the Ramsay clan. The Ramsays (Director brothers Tulsi and Shyam along with their Producer father, F.U.)struck local box office gold with this feature which re energized a sagging Bollywood film industry. Local films playing there were not reaping the profits they once were and it needed a shot in the arm. This 1984 feature provided just that by mixing in for the first time, gory horror and lewd (though censored) sexual overtones. Though frowned upon by the local media, it did extremely well at the box office, proving that some well made exploitation can go a long way no matter what region of the world you live in.

The film begins with a very effective flashback. Saamri, a vile vampiric, essentially subhuman sicko is (after much difficulty) captured by townsfolk. Brought before the Sultan and read the laundry list of his awful exploits (the very worst is his habit of digging up fresh corpses and eating them), he is unhesitantly put to death. Despite calls for Saamri to be burned, the Sultan elects to have him beheaded. In response, Saamri places a curse on the Sultan. All of his female heirs will die in childbirth. Fast forward some two hundred years to modern times, (1984, though still suspiciously stuck in the 70s) and the Great, Great... Grandaughter of the sultan (played by Aarti Gupta) finds herself in love. Her father knowing of the curse, attempts to chase her boyfriend (played by Mohrish Baal) away but to no avail. When the boyfriend gets wind of the goings on, the two lovers set off to the castle, along with his kung fu fighting friend (Puneet Issar) and his friend's girlfriend in order to rid the family of it's curse.

The Ramsays prove to be masters of low budget filmmaking here. The castle sequences are very moody and atmospheric, with some commendably creative camera work at hand. This has the look and feel of a true gothic horror film.

The lead actors are very good across the board with the biggest accolades going to Ajay Agarwai as the terrifying Saamri, one of the greatest horror villain's of modern cinema. Both scary and repulsive, Agarwai seems to relish the role and consequently owns every scene he's in. Aarti Gupta is very beautiful and became a semi regular in future Ramsay features. Puneet Issar was obviously chosen for his physique and his martial arts backround as he is by far the best fighter I've seen in Bollywood pics. His fights here are brutal, bloody and just realistic enough to work (though nobody will mistake these battles for those in Hong Kong films of the 80s).

As is usual with Bollywood exploitation of this time, there are several bewildering musical numbers. I personally have never been a fan of films where song and dance numbers break out of nowhere (you will never catch me watching an old MGM Musical), but the numbers here are at least tolerable. Besides any musical scene where the woman is bumping and grinding to the point where it appears as if she's having sex with an invisible man can't be all bad.

Then there is the unfortunate comedy relief. Having seen tons of Chinese Kung Fu movies, I'm quite used to terrible over the top humor that seems to persist in cinema from the Far East. Apparently, the Middle East isn't immune to such things, either. Here we have Jagdeep. Jagdeep was by all accounts a beloved comedian in his home country. Let's just say his talents do not translate so well here in the West. In Purana Mandir, there is an entire subplot that is a parody of Sholay, one of the most popular films ever to come out of India. Inserting these unconnected scenes into an otherwise action packed horror film can cause unsuspecting viewers to feel a sense of Vertigo. But these exploitationers were designed to entertain local audiences first and formost. Just another case of culture shock for this Yank.

Despite the comedic subplot, Purana Mandir is still tremendous fun. It is arguable that the Ramsays have since surpassed this  action horror musical with even more outrageous efforts, but this debut is still one of their best. Highly recommended. Just watch out for that infernal Jagdeep!


Posted by Films from the Far Reaches at 2:43 PM

Email ThisBlogThis!Share to TwitterShare to FacebookShare to Pinterest
Labels: India