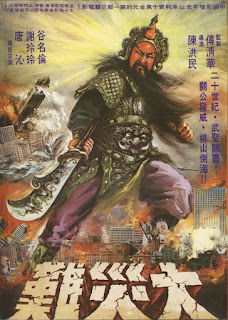 This is just the kind of movie that made me want to start a blog in the first place. It's a 1976 Kaiju Eiga from Taiwan that was until recently, not thought to have existed. I first heard about it a year and a half ago and it sounded like some half baked urban legend (a giant Guan Yu battling giant aliens... really?!). Then a few black and white photos appeared revealing it to have been an actual movie, albeit a very much "lost" film. Then for a brief time a youtube clip showing a battle sequence magically appeared before shocked, disbelieving fans. So not only did this nearly mythical film exist, but it may not be quite so lost after all! It wasn't long after that that the full movie became available, with english subtitles no less. So for a film that has garnered near legendary status, did it live up to expectations? In a word, YES!

Calamity has a first half that actually plays more like an ecological end of the world tale than a monster movie. The story centers on Zhao, an elderly sculpture who's stricken with Glaucoma and finds himself nearly blind. All his life, he has attempted to create the ultimate sculpture of Guan Yu, the mythical Han General who's Civil War battles helped to cause the collapse of the Han Dynasty. Zhao is fearful of an imminent "calamity" and is hopeful that his ultimate sculpture of the "war god" will provide the people with protection when the time comes. At odds with him is his son, a noted scientist who does not share his father's beliefs. Throughout the first half, there are looming threats of an alien invasion (the tried and true threat of nuclear harm is behind it) and it is actually treated in a serious, subdued manner. However, once the invasion begins, all credibility is (joyously) thrown out the window as a trio of giant bug faced aliens beam their way down from their spaceship and strut their way into the city, making it their personal playground. All hope seems lost until Zhao with one final prayer, watches as his statue transforms itself into a giant, living form of the spirit of Guan Yu. The final 25 minutes is one looong running battle that is nothing short of kaiju heaven for fans like myself.

I would really like to know who's idea this film was, because it plays exactly how it reads, like some demented masterpiece. The aliens act almost comically over the top (though not eye rollingly so) and the very idea of a giant Guan Yu... it's tough to put into words just how crazy this concept is. The idea seems to be some unholy combination of Ultraman and Dai Majin, but even that doesn't quite do it justice. The fact that the character is played dead serious (complete with Peking Opera style fighting and posing!) just makes the proceedings all the more wonderously bizarre.

Calamity is a lost film that truly lives up to it's legend. It's quickly become a favorite of mine and would make for a great double bill with Inframan. In short, Calamity = big time fun!

Posted by Films from the Far Reaches at 10:04 AM