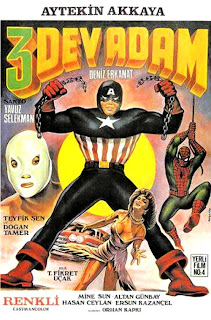 Along with Turkish Star Wars (The Man Who Saves the World) this is probably the most infamous of all the Turkish Pop films.

For a long while up until the point of this film, Turkey has had a fascination with superhero adventures. Most of these resembled American Cliff Hanger serials of the 1940s, but spiced with sex and violence and amped up with their patented go for broke, high energy, Guerilla style of filmmaking. At their best, the results were irresistible. 1973's 3 Dev Adam while not the last superhero film that the Turks made, can be seen as the culmination of this particular (and peculiar) subgenre.

In 3 Dev Adam, we have DC Comics' Captain America (minus his shield) teaming up with Mexico's living legend Lucha Libre hero, El Santo against Marvel Comic's Spiderman. Yes Spidey is the bad guy and unlike the other two, he doesn't really resemble the comic book. Apparently as a more recent (at the time) comics character, Spidey wasn't very well known in Turkey. Hence, the change in personality. Here he is a sadistic, bushy eyebrowed nutjob who can seemingly clone himself on the spot as he's being killed (at least I THINK that's what's going on). He also spins not one web. One odd thing about Cap. and Santo is that they seemingly do not wear their costumes in order to hide their identity (they appear and fight as often in street clothes as in costume). The reason? Cap explains that Spider is a childlike maniac who wears a mask and would be driven crazy by another masked man. O.K. ...

There is a surprising level of sadism in this film, so it's not for kids. Right at the opening, Spider and his gang have a woman buried up to her neck at the beach. They then use a motor boat blade to kill her... slowly, with her blood splashing on the female member of the gang. Later (in the film's most hilariously infamous sequence) Spider has a man tied up in the basement of his hideout and has the man's face eaten away by... a Guinea Pig! Even stranger things happen later when as Spider is having a swinging time gettin' his thing on with his main squeeze, the scene cuts to a closeup of two little porcelin gnome figurines. For absolutely no apparent reason, they turn toward each other and giggle! This is about as WTF a moment as I have ever experienced while watching a movie. I had to rewind it just to make sure I wasn't hallucinating.

Filled with action, energy, gore, sleeze and bad Spidey behavior, 3 Dev Adam is as entertaining as no budget filmmaking gets.


Posted by Films from the Far Reaches at 1:33 PM