The Killing of Satan 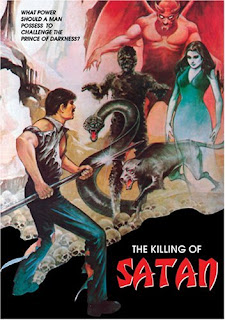 Are you a horror fan? (sure, who isn't?) Feeling a little jaded? Feeling a little adventurous? Enjoy your horror with an extra large side dish of cheese? Want to see something completely different? Well then, this film (released in 1983) is just for you...

Welcome to the Phillipines and this heavily "Christian" flavored horror/fantasy/action film, The Killing of Satan. Here is a film that I can truly say is like no other. A bizarre concoction of action, horror gore, sleaze and above all else, a depiction of Satan and Hell that is only rivaled by Mexico's Santa Claus vs The Devil for sheer goofy spectacle.

The (surprisingly convoluted) story starts with Lando (yes, that's his name) returning home from prison to his wife and daughter on an island village only to find his uncle Miguel struck down by The Prince of Magic. Lando discovers that he has inherited his family's magical powers and is enlisted by Miguel to stop The P.O.M. Lando is at first hesitant, but when The P.O.M. sends his minions to lay waste to the village, injure his wife and kidnap his daughter in order to present her to Satan (yes, THE Satan), Lando springs into action and a series of pitched battles ensue.

I was a little put off at first with both the film's tone and pacing. For such an over the top adventure the film presents a gloomy, deadly serious first half that just sort of sits there. There's lots of suffering and crying early on and first time viewers may think it to be some screwy, over baked soap opera. But stay with it, because it's the second half (as Lando finally challenges first The Prince of Magic and then Satan) where things really pick up. Watching the low budget (O.K. no budget) duels between Lando and the evil ones (they can move things with thought and shoot lasers out of there hands) is a sight I won't soon forget. The wildly inappropriate English dubbing serves as icing on the cake.

I am not familiar with director Efrin Pinon, but he seems to have been quite a prolific director in his home country having worked from the late 70s up until the late 90s. If his other films are as much fun as this one, then I'll have to add him to my list of directors I need to check out.

Overall, The Killing of Satan (which amazingly, enjoyed a U.S. vhs release back in the 80s where it likely confounded unsuspecting rental customers) is a truly wobbly inducing experience and is recommended to those who are willing to just go for it.

Posted by Films from the Far Reaches at 12:48 AM

Email ThisBlogThis!Share to TwitterShare to FacebookShare to Pinterest
Labels: The Phillipines