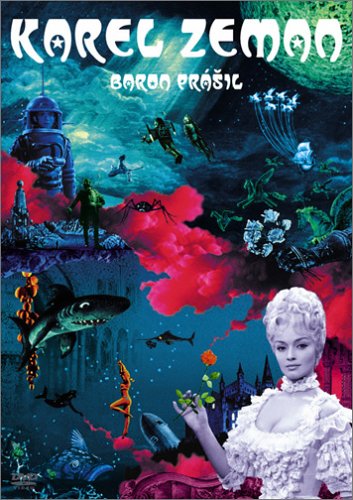 The name Karel Zeman is not widely known among fans of fantastic films and that's a damn shame as in my opinion, he just may be the most innovative special effects man that ever lived.

Born in Czechoslovakia in 1910, Karel Zeman has been referred to as the Czech George Melies, but he was actually more than that. He was the master of whatever type of effect he chose to use, be it stop mation animation, life sized props, forced perspective (to present size and depth; he is particularly adept at this), there was no apparent optical trick that  Zeman couldn't master. These effects were not "realistic". Of course, they were not intended to be. His work was not based in Hollywood style realism. Often, his films looked like sophisticated childrens' books come to life. It takes some adjusting to those unfamiliar with his techniques. Many will claim they look fake, but that's the whole point. Once a viewer properly tunes themselves in to what Zeman was doing, they will be able to understand just what a master craftsman he was.

During his time (between the late 1940s and the late 1970s), Zeman made many, many shorts and features. Not all were masterpieces, though all are worth seeing. Among his best were the celebrated short, "Inspiracion" which incorporated glass figurines, "An Invention of Destruction" (aka The Fabulous World of Jules Verne) a black and white fantasy where the overall look of the various effects strikingly resembled the original wood engravings of Verne's book and especially Baron Prasil which I consider to be his greatest achievment and one of the best pure fantasy film ever made. It is an incredible visual experience in which every frame looks like something out of a two dimensional painting. It is one of those films you just want to stare at...

Munchausen (for those who don't know) was an 18th Century German officer who was known for telling extremely tall tails and attempted to make people belive they were true. No one did, but they found his outrageous yarns entertaining. This film version tells primarily of his stories of being the first man on the moon and conquering the Turkish army singlehandedly.

This was one of many filmed versions actually. Two other notable ones were the visually sumptuous, but deadly dull 1943 German lensed film (this was the Nazis attempt at bettering America's Wizard of Oz and Great Britain's Thief of Bagdad) and Terry Gilliam's somewhat hit or miss 1988 adaptation, centering on mostly different tales than what had previously been shown. None of these others can come close to matching Zeman's vision.

Speaking of Gilliam, he was one of Zeman's biggest fans. His animation on Monty Python was heavily influenced by his idol's work.

Posted by Films from the Far Reaches at 4:36 PM