To Kill a Mastermind 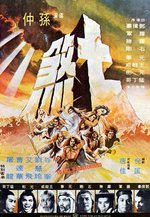 
Sun Chung stubbornly remains one of the lesser known Shaw Bros. directors. His name does not generally resonate the way that his contemporaries, Chang Cheh and Liu Chia Liang do. This is really a shame because although his output hasn't been as proloific, the quality of each of his films has been the equal of anything done at that studio. Some of the films he's best known for are the superior, melodramatic kung fu flicks, Avenging Eagle and The Kung Fu Instructor, the Billy Chong vehicle, A Fistful of Talons and the gory horror cult favorite, Human Skin Lanterns. Basically if it's a film directed by Sun, it is worth seeing.

This film, To Kill a Mastermind was lensed in 1979 and sandwiched between Avenging Eagle and Kung Fu Instructor. Unlike the other two films, it was not a hit (in fact it bombed) and was until very recently considered a lost film with only fuzzy, blurry bootlegs to judge it upon. Fortunately, a better print surfaced on Youtube and is now available in the grey markets. The reason it failed at the Box Office is most likely attributable to the fact that unlike the others, it didn't feature a name actor in the lead. No Ti Lung or Fu Sheng was to be found here. Regardless, To Kill a Mastermind ranks right up there with the others mentioned; as potent a film as anything else the director has done.

The story is about the reformation of the dreaded 7 Evil Spirits Clan. They at one time, ruled the land and now it's leader (played by ever reliable Shaw heavy, Wang Lung Wei) along with some new members has launched a comeback of sorts. Enter General Yang Zhen Yu who is sent to elminate the Clan both from without and within. He has a spy working to sabotage the inner workings of it's members by cleverly staging various ruses, thus allowing distrust to reign in the hope that the Clan will methodically destroy themselves. But even within the elaborate scheming, things aren't as they appear. We're talking double crosses galore, right up utill the finale where the identity of the secret, unseen Grandmaster is revealed.

From this tricky, twisty plot, Sun unleashes an amazing visual feast. His films are consistently some of the best looking of all Shaw epics. One of his strengths is the mise en scene. He brilliantly films his stories with clever use of scenery, shot through wide camera angles, that the conflict itself seems to take on a life of it's own; almost overshadowing the individuals involved. The martial arts choreography though very good, tends to rely on more wirework than that of his contemporaries. This is occasionally distracting, but the fighters and choreography (courtesy of veteran Tang Chia) are extremely sharp, so this isn't a problem.

To Kill a Mastermind is an upper echelon Shaw Bros. kung fu movie that is in desperate need of rediscovering... as is Sun Chung himself.

Posted by Films from the Far Reaches at 11:59 PM