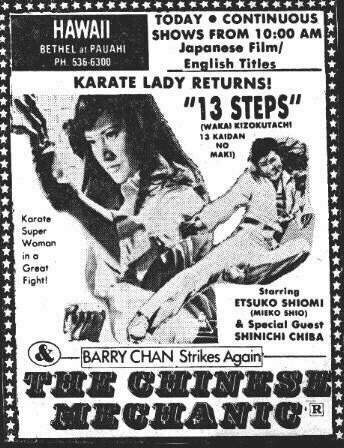 
The film opens on a particularly grim scene. Two young women are tied to railroad tracks, topless and spread eagle. Into the frame appears an all female gang, obviously the ones responsible for the girls' predicament. As they torture and beat the two unfortunates (and threaten to do worse), the scene grows even grimmer. Suddenly, the "festivites" are interrupted by an approaching lone figure, dressed in a long white overcoat. It is Etsuko Shihomi. The music swells as she (in an amazing low angle shot) throws off the coat to reveal a black uniform, complete with red gloves... and the number 13 prominently displayed on her shirt. As the credits roll, she single handedly lays waste to the entire girl gang AND the accompanying male gang that arrive on the scene , ready to attack our (super) heroine. Punches, kicks, flips and a gory eye gouging (for good measure) are all on display as the freeze framed credits continue to roll. Over the carnage, a superhero ballad plays, sung by Shihomi herself. Could this be the greatest opening sequence in the history of action cinema?

Amazingly, it only picks up from there. The term "action packed" has been overused ad nauseum, but it applies here in spades. There is barely a slow second in this economic 78 minute action classic and it never once gets tedious to watch. The action builds properly and exhilaratingly, thanks to the sure hand of director Naito Makoto. I'm unfamiliar with Makoto's work and he appears to have directed only sporadically over the last several decades. But if this film (full title; Maki's 13 Steps; Young Nobility) is any idication, he should've been give many, many more opportunities.

Then there is Maki herself, portrayed by the incomparable Etsuko "Sue" Shihomi. Shihomi is easily one of my favorite fighting femmes and this is her masterpiece. As Shinichi "Sonny" Chiba's top student, she combines the cute girl next door looks with an absolute ferociousness to her performances that is quite alarming, even to those already familiar with her work. So strong and so thorough is Shihomi here that by the climax where she alone confronts a gang of fifty or so Yakuza with the line, "Maki and her 13 steps will send you all to hell!" you fully and unhesitantly believe that she can and will do just that.

The story basically shows the running battle between Maki and her girl gang as they butt heads with a powerful Yakuza gang. Along the way, Maki incurrs the vengeance of a spoiled gang daughter she had previously humiliated and confronts her equal, an ex boxer who turns out to be an honorable fighter. Both characters go from foe to tenuous ally as the Yakuza head alternately dishonors both. This makes for a great, twisty tale to go along with the almost constant karate confrontations.

Maki's 13 Steps (even with subtitles I am not certain what the 13 Steps is all about, but nevermind) comes with my highest recommendation. Where for art thou, Etsuko Shihomi?