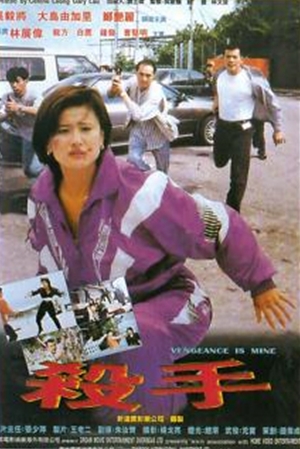 Here's a fairly slow paced and incredibly cheaply made production that was shot on videotape (ugh!) and intended as either a direct to video release or possibly made for t.v. (the HKMDB lists it as the latter). Sounds pretty lousy, I know. So, why would anyone be interested in watching it? The answer, because it stars Yukari Oshima. Yes STARS Yukari Oshima as in The Osh finally gets the lead role all to herself after years of taking secondary (or even lesser) roles in so very many films. And this little cheapie flick proves what we die hard Yukari fans had long suspected, that our heroine could not only carry an entire production all by her lonesome, but would be as compelling as any screen actor or actress around in doing so.

Once you get past the terrible look and casual pacing of the film, you will discover a tour de force Osh performance, one written to allow her to transform from innocent victim to murderous avenger. Yukari portrays Angel Lee, a newly married Asian American who finds her blissful honeymoon interrupted by five masked thieves. They murder her husband in front of her and then take turns raping her (the camera carefully concentrating on Osh's ever expressive eyes and clenched fists, allowing the viewer to experience the pain and horror along with her). Now all but dead inside, Angel sets about finding her assailants. Initially agreeing to help the police in their investigation, Angel grows increasingly bitter and desperate as the years go by without a single lead. All the time staying put eerily at her dead husband's residence, Angel finally decides enough is enough. Training herself in various forms of self defense, she slowly goes from rumpled and sad victim to ultimately striking looking avenging... well, angel. Tracking down her assailants, she discovers they are now all doing very well for themselves as rich businessmen through their ill gotten gains. Attaining assistance from her sister in law, an aspiring model and actress who's been lured into the seedy world of porn filmmaking coincidentally by one of Angel's attackers, our avenger goes into action. In ever increasing brutality, she gorily shoots and stabs her way through the ranks of each now well to do enemy. During this process, it is clear that Angel has "come back to life", her pained expressions giving way to the kind of cold, yet wildly determined stares that only Yukari can convey. The police chief feeling sorry for her plight, decides to briefly look the other way while gently trying to persuade her to hand over the evidence she gathered (and that they infuriatingly could not), but she refuses. By the time Angel shows up at the head baddie's estate, she is clad in black and looking like the baddest little lady on the face of the earth.

Again, it really is a shame that the choice was made to film this on videotape as it contains one of the awesome Osh's finest and most majestic roles. The action itself is only second rate (perhaps the biggest casualty of the absence of nitrate), but Yukari's amazing intensity here easily makes up for it. Appearing in nearly every scene, this film allows her the most screen time of her career (the only other film I can think of where she takes the loan lead is the 1991 drama, The Angels which annoyingly enough, was also shot on video!) and will have fans lamenting that she wasn't given more opportunities like this throughout her nearly seventy (!) film career.

Posted by Films from the Far Reaches at 4:06 AM