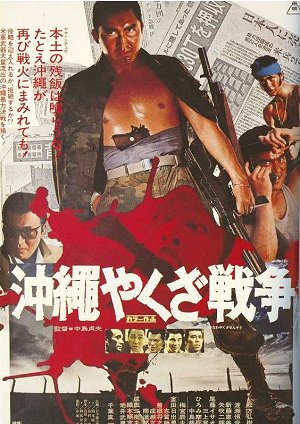 What's this? A 70s ultraviolent Japanese Yakuza pic that opens with an over the top Sonny Chiba karate smackdown? Cinema nirvana achieved? Well not quite, but damn close...

The premise; a grand yet unstable alliance is formed by various feuding Okinawa gangs in order to fend off a new and aggressive Mainland mob that is encroaching on their collective territories. This fragile allegiance finds itself shaken by volatile (to put it mildly) right hand man (Chiba) who along with having an apparent death wish, deeply resents the new civil ("cowardly") ways of his associates and seeks (with fist and foot) to destabilize all involved.

Into this volcanic situation, director Sadao Nakajima crafts a visceral and emotional roller coaster ride of comic book-like carnage. On display, we have a particularly agonizing castration scene (like there's any other kind), a rival gangster getting run over and backed over... and back and forth and back again... and forth again, blood squibs galore, double and triple crosses that cause one to rethink whom they should be rooting for (if anyone) and a terrific and emotionally satisfying speedboat shootout finale. At the center of it all is Chiba who despite not being the main character, steals every frame he's in while giving what may be the most animalistic perf of his career. Picture the Terry Surugi character if he were to willingly dive into the abyss and you have a fair idea of what to expect here. Always intimidating and willing to get into anyone and everyone's face (including doing karate forms in a nightclub in front of rivals, just DARING them to do something about it), he achieves a certain nobility despite his inherent despicableness. It is to Chiba's and Nakajima's credit that one feels just a slight bit of sympathy when this character is ultimately betrayed and ambushed. It is almost akin to watching King Kong get shot off the Empire State Building.

Posted by Films from the Far Reaches at 2:14 PM