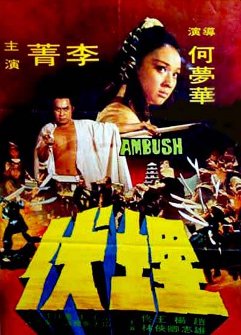 Prolific director/auteur Ho Meng Hua (who has fashioned everything from the Monkey King/Journey to the West films of the '60s, to the influential cult fave 'The Flying Guillotine', to the King Kong knockoff 'Mighty Peking Man' to the outrageous dark horrors of the 'Black Magic' series) lenses a supreme wuxia/basher/crime thriller hybrid that manages to do justice to each genre.

The setting is the Tang Dynasty. A high ranking constable is framed for the theft of a shipment of jewels. Finding himself on the run, our hero must evade capture while attempting to find out who framed him as well as discover where the stolen jewels are located. He also finds himself in a tenuous relationship with a mysterious swordsman who's been trailing him; his motive unclear...

'Ambush' is one of those films that I simply stumbled upon while researching Shaw Bros. releases from this time period and turned out to be quite a buried treasure of entertainment. Ho Meng Hua keeps the complicated yet linear plot moving at an increasingly swift pace and loads the widescreen picture with some particularly dazzling and sumptuous visuals (at one point there is a striking faux horror element that anticipates the director's notorious later work for the studio). But the real selling point for me was the plentiful action. Initially appearing to be a strictly wuxia picture, the battles eventually give way to some eye opening (for a Shaw production of this vintage) hand to hand duels. These are all filmed with an edgy gusto that I found particularly thrilling. The highlight is undoubtedly the intense finale which takes place in and around a giant windmill that may have been specially constructed for the film. Ho shoots the sequence masterfully, milking every bit of tension and utilizing every interior and exterior section of the prop. It is an amazing sequence  and alone makes the pic a must-see.

In a surprising cast move, Chiao Hsiung assumes the lead protagonist role. Chiao had by this point made a career out of playing notably nasty villains (most of us westerners will recognize him from 'The Chinese Boxer' and 'King Boxer/5 Fingers of Death') and though initially questioning the move myself, I was pretty quickly won over. He doesn't have the typical 'heroic' look, but his quiet charisma suggests that he could indeed have made a career out of this type of role. Regular Shaw starlet, Ching Lee has little to do other than be rescued by Chiao though their final exchange is quite touching (after all she's been through, she entertains the idea of living with him in seclusion). Yang Chi Ching is another surprise as the main villain. Unlike most white haired baddies in kung fu films that are usually played by much younger fighters in wigs, Yang is well into his fifties, yet is quite imposing in the role, lending realism and respectability to his final battle with Chiao at the previously mentioned mill. Dean Shek is primarily known for some wince inducing, over the top comedic roles in later kung fu comedies, but delivers a fine, low key dramatic perf as the mysterious (and ultimately untrustworthy) swordsman. Chiang Ling threatens to steal every scene she's in as the amoral seductress who though morally irredeemable, still manages to gain a small measure of audience sympathy (O.K. a very small measure).

'Ambush' is a top notch Shaw Brothers effort and a most curious and unusual one. I'll admit that there are still many Shaw releases from this early period that I've not seen but this film alone is cause enough for me to keep vigorously digging around for more. Hugely entertaining and highly recommended.

Posted by Films from the Far Reaches at 2:32 AM