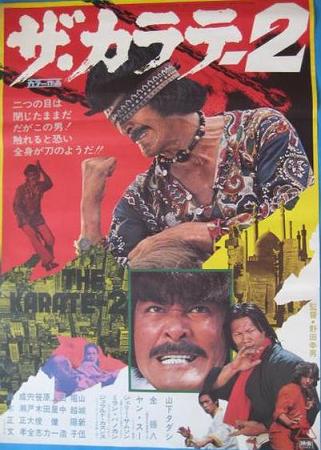 
Way back in the '80s, I had first seen 'The Karate' under it's ridiculous U.S. retitling, 'Bronson Lee, Champion'. Little did I realize at the time that it was merely the first of an increasingly bizarre trilogy of straight faced action satires, the kind that only Japan could have produced.

In the trilogy, star Tadashi Yamashita plays a fighter named... Tadashi Yamashita (He is never referred to as Bronson Lee at any point in the dubbed version, but nevermind). In the first entry, he loses his sight through the treachery of his rivals, yet still enters a high stakes tournament in order to help his ailing grandmother.

For the sequel, director Yukio Noda amps up both the action and ridiculousness considerably. The film opens with Yamashita being challenged by the 'Guillotine Brothers' of New Guinea. He defeats the pair only to be forbidden from fighting by his karate instructor (Masafumi Suzuki, best known for his appearances in Sonny Chiba's 'Streetfighter' films). Regardless, once word of the Guillotine Brothers' defeat spreads, fighters from all over the world are dispatched to kill Yamashita as well as steal the prized 'Orikirimaru Sword'.

With the unwanted melodrama of the first film out of the way, Yukio Noda runs wild here, using up much of the film's running time on Yamashita's increasingly bizarre array of opponents/assassins. They are Korean Hap Ki Do master Kim Jin Pai (also going under his real name as well as martial arts style; and star of Hong Kong films like 'The Madarin (Godfathers of Hong Kong) and 'Valley of the Double Dragon' (Kung Fu of Tai Kwan Do), reviewed elsewhere in this blog), West Germany's 'Blue Geller' (who supports what may be the worst hairdo in the history of cinema), Sweden's 'Dr. One', U.S.A.'s completely crazed (naturally) 'Killer Samson' (who's uniquely designed Sai helps Yamashita I.D. the main villain) and the most dreaded of all, Dracula Jack (Bolo Yang Sze in a particularly imposing cameo).Yamashita himself is in top form (squeaky faux Bruce Lee wails and all) and the nearly constant duels between he and his goon squad of nemesis' build properly and impressively, leading to a dual climax (first an Enter the Dragon style free for all, followed by one last smackdown on a sandy beach) that's as good as any you'll see in the genre.

It isn't all fun and fury, however. The film does settle down in it's middle section as Yamashita befriends a bullied child and teaches him some basic karate moves. Luckily, these scenes don't last very long and are not as sappy as they may have been. Then there's Yamashita's goofy sidekick. His typical antics are of the 'look how great I am, oof I hurt myself' variety. Not as embarrassingly bad as some similar characters I've endured in like films from Hong Kong and Italy and I at least found him to be mildly amusing in spots, but really could have done without this guy, altogether.

These minor complaints aside, 'The Karate 2' adds up to mucho high octane fun for the undemanding, thrill seeking Karate film fan (and really, is there any other kind?).


Posted by Films from the Far Reaches at 2:30 AM