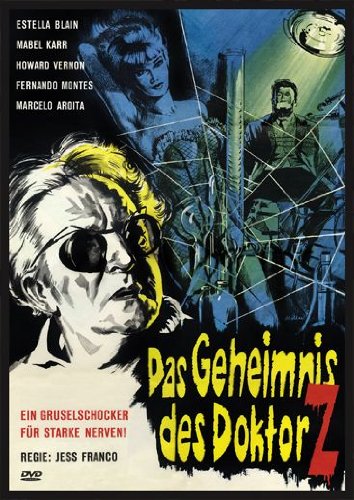 
When it comes to Jess Franco, I wouldn't call myself a fan of his so much as a curious onlooker. The man has made so very many films (most of which I'll admit I haven't seen and in some cases, probably never will) that it's almost beyond comprehension. He's made some good movies... and a ton of crap. But perhaps the best thing Franco has ever done (in my casual opinion, anyway) is the fetishistic freak-fest, 'The Diabolical Dr. Z'.

The film opens with the creepy, wheelchair bound Dr.Zimmer pleading with his associates to continue the work of the loathed Dr.Orloff (referencing Franco's earlier and likewise recommended film) in using surgical mind control in order to 'cure' criminals. He is immediately shot down by his peers (one going so far as to call him a Nazi) and promptly succombs to a heart attack. He whispers to his daughter, Imra in his dying wish that she continue with his experiments. She agrees and secretly plots her revenge on the doctors who 'killed' her beloved father. After faking her own death and changing her identity, Imra finds what she feels is the perfect instrument of said revenge in the form of  Nadia aka 'Miss Death'; a night club performer dressed in mostly see through attire with spider limbs covering the naughty bits. Her act depicts her capturing men in her 'web' (literally) and clawing them to death with her unusually long fingernails. Imra has her captured and hypnotized (using dear old dad's forbidden techniques). Dousing her nails with poison, Imra sends the hypnotized Nadia out and one by one she seduces each unsuspecting doctor before dispatching them with her poisonous 'claws'.

'The Diabolical Dr. Z' (actually it's original title, 'Miss Muerte' is much more apt) proves that Jess Franco can make a beautiful looking low budget film when he wants to (something that is rarely in evidence in the 150-plus 'epics' he had done since). Franco uses moody, suggestive B/W photography to supremely unsettling effect. There are many fine set pieces from the opening prison escape, to Miss Death's surreal stage show, to the murder on the train. Franco films these sequences expertly, so much so that you have to wonder if this is the same Jess Franco that is responsible for so many other er, movies.

This film was also the first of Franco's to feature the freaky femme fatale concepts that would be fleshed out (no pun intended) to pornographic extremes in later pics. Here it is merely used as a very kinky plot device. The idea of the sultry female with 'dangerously' long fingernails that both intimidates and attracts men is a well worn concept, both visually and in literature, but the idea to actually feature said appendages as an instrument of death in a movie is truly male fantasy taken to it's most demented extreme. The whole business is handled so bizarrely matter-of-fact that it can make first time viewers' shake their collective heads in disbelief. I know I did...


Posted by Films from the Far Reaches at 3:42 AM

Email ThisBlogThis!Share to TwitterShare to FacebookShare to Pinterest
Labels: Spain