I Love Maria (aka Roboforce) 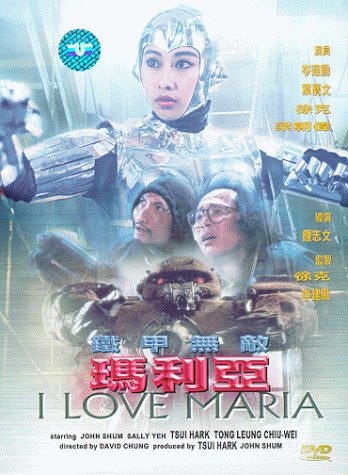 
Producer/Director/Actor Tsui Hark at the peak of his creative output, tackles this oddly lighthearted variation of Paul Verhoven's much darker 'Robocop' with a nod to Fritz Lang's 'Metropolis' (which also featured a robot duplicate of a female character named Maria).

The film follows the ironically named Hero Gang, a villianous organization that threatens to send it's giant transformer robot out to reek havoc on Hong Kong if the city doesn't fork over a ton of cash. With the police helpless, a trio of bumbling heroes go into action. They are an eccentric inventor (John Shum), a newspaper reporter (Tony Leung Chui Wai) and an ex-gang member determined to right his ex-mates wrongs (Tsui Hark). The Hero Gang in the meantime have created another decidedly different robot. This one is patterned after female gang member, Maria (Sally Yeh). This robot is sent after our goofy protags, but it malfunctions and is reprogrammed to go after it's creators instead.

'I Love Maria' is a film with a particularly troubled production history. How troubled? Well the film was originally to be produced by Tsui Hark and directed by David Chung. However at some point near the end of filmmaking, meddling Tsui took over director's reigns and reshot chunks of footage. Exactly how much is uncertain, but it must have been extensive as in the original cut, Tsui's character is not in it! That's right, a major character is wriiten into a film just as it was near completion, yikes! That this is scarcely noticeable in the final cut is admittedly a tribute to Tsui as a director, but it begs the question as to why this was done in the first place. Was the original film that bad or was this yet another case of Tsui the producer forcing his will on one his young director's works (a common theme for Tsui at this stage of his career which for better or worse, must have been utterly maddening for whichever director he placed his stamp on). The end result, is (as would be expected) a pretty uneven affair. The early portions of the film are dedicated to our mismatched heroes through a series of subdued 'Lucky Stars' like misadventures. As usual, I could have done without much of this, but at least the three leads are charismatic enough to make it watchable. Things pick up in the second half however and feature some impressive action setpieces and fun low tech special effects. There is also a good natured feel to the overall film (belying it's problematic production) and this helps make it very rewatchable.

Of the cast, the film belongs to Sally Yeh who turns in a incredible dual performace, possibly the best of her career. Utterly and wonderfully ruthless as the female gang member, she is completely charming and believable as the reprogrammed fembot. (and looking extremely chic as both). She also gets to briefly show off some great martial arts moves which made me realize that she could have had a successful career in the 'Girls With Guns' subgenre if she had chosen to go that route. It also makes me lamment further that her standout martial arts battle sequence in 'Peking Opera Blues' was mysteriously cut out (it can be glimpsed over the end credits).

Overall, 'I Love Maria' is far from perfect. As a comedic robot adventure, it isn't as much fun as 'Aces Go Places 2' and as a superhero adventure, it falls short of 'Super Inframan'. Still it is an enjoyable little sci fi action comedy, just one that feels like it could have been even more. I'll take it as is, though I'll admit that I'm very curious to see David Chung's original cut. But that's unlikely ever to surface.


Posted by Films from the Far Reaches at 1:42 AM