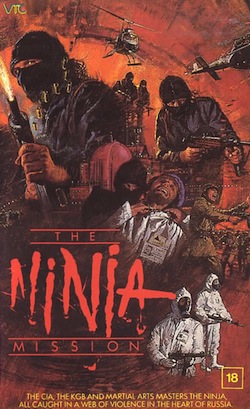 
Swedish Ninja; yep, it just rolls right off the tongue doesn't it? What's that, it doesn't? Yeah, guess not. For most in fact, the words Sweden and Ninja make about as much sense together as Swedish meatballs with chocolate syrup. Yet sure enough, that's exactly what we're dealing with here (Swedish Ninja that is, not the meatball thing). As much of an anomaly as it seems to be, it kind of makes sense considering that it was made in 1984 which represented the peak of Ninja mania, both here in the U.S. and apparently just about everywhere else too.

This tale of espionage centers on a brilliant Russian nuclear physicist who while attempting to defect to the West, finds himself kidnapped by the KGB along with his beautiful daughter (don't all brilliant scientists seems to have a beautiful young daughter in these types of films?). While in their captive, the Ruskies force him (by torturing her, of course) to finish his work on a top secret weapon that could ultimately swing things in favor of the hammer and sickles. In response to this a C.I.A. operative dispatches his ninja squad in the hopes of rescuing the two captives... and retrieve the all important secret formula.

The Ninja Mission has built up something of a cult reputation since it's brief vhs release here during the mid eighties and it's easy to see why. Though it's political shenanigans felt tired and dated even back then, it is buoyed by it's unusual and plentiful action scenes (most of which are relegated to it's first and last thirds, allowing the story to take over in the middle). In addition to using the expected ninja style and weapons (stealth, stars, etc.) these assassins were also inclined to use machine guns! This unusual (and welcomed) trait gives things a decidedly esoteric feel. The martial artistry displayed here is O.K. but nothing special (this could be said for most non Asian martial arts movies back then), but the action scenes do have an ace in the hole and that is extreme gore. This is easily one of the goriest films of this type that I have seen. The limb separations, decapitations (icnluding a head severed at the jaw line!) and blood squibs are all of the ooey gooey variety which are more common in Italian horror films. Much of this gore is also shot in Peckinpah wannabe slo-mo, in case you needed more time to take it all in.

Overall, The Ninja Mission makes for fairly fun, exploitative entertainment. It's production values are decent and the too familiar story does not bog the action down too badly. It's no masterpiece, but it will satisfy the ninja lover craving something a little different.

Email ThisBlogThis!Share to TwitterShare to FacebookShare to Pinterest
Labels: Sweden