The Game of Death 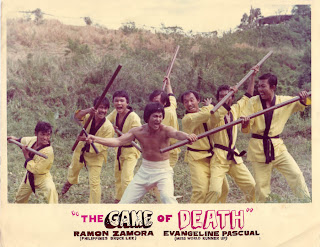 
Ramon Zamora (birth name San Jauz Rizal) started his career in the 1950s as a stage actor and stuntman, before eventually finding a niche as a  sketch comedian on T.V. in the 1969 comedy show, Super Laff-In (The Pillipino version of Laugh-In, like I needed to state that). When the show's network, ABS-CBN was closed in 1972 due to the declaration of martial law, he found a another life as a film actor. His breakthrough part was as the popular local comicbook character, Pedro Penduko in the 1973 fantasy film, Celso Ad Castillo. The success of this film made Zamora an instant movie star. After this, he went on to his greatest commercial success, that of the "Phillipino Bruce Lee". Hong Kong Kung Fu movies hit like gangbusters there and local audiences craved a homegrown counterpart. Zamora proved more than up to the challenge by starring in a long lasting series of Lee-alike films throughout the decade, often going as far as stealing the original titles. I personally have seen two of his Brucesploitation epics, 1977s Return of the Dragon (aka Revenge of the Dragon) and this one, 1974s The Game of Death which of the two, proved to be by far the more blatantly Lee inspired pic.

Though titled after Bruce's unfinished final film, The Game of Death is actually a scaled down Enter the Dragon clone. Zamora plays Charlie, an undercover agent for The Phillipino government. The opening scene features Charlie initially losing a match in order to increase the odds in his favor (ala John Saxon's character in Enter...). Afterwards, he and his decidedly goofy manager are invited to an Island tournament hosted by the mysterious Col. Von Stauffer (not completely sure about the name as the audio was slightly muffled). It seems Stauffer (who looks uncannily like Ed Parker on a bad hair day) has been kidnapping women and Charlie's mission is to infiltrate the tournament and get to the bottom of things. The film mostly follows Enter"s basic plot, except it focuses exclusively Zamora's Charlie (as opposed to sharing time with Saxon and Jim Kelly). The film shifts gears late however and becomes a carbon copy of "The Most Dangerous Game" (the Game of Death of the title). as Stauffer using a crossbow, hunts down Charlie, the women and several defecting tournament fighters whom Charlie has convinced to help in his cause.

The film is rather sluggishly paced and uninvolving in it's first act, but does eventually get in gear and the second half is pretty lively. Zamora proves to be a good martial artist with strong screen presence. His Lee imitation is quite good and trumps several of his Hong Kong counterparts. He is paired with the tall and beautiful former Miss Phillipines/Miss World. Evangeline Pascual who makes her feature film debut here. She shows some acting ability to go along with her real life Karate moves and is definitely a treat to watch in action.

Ultimately, The Game of Death is a decent Brucesploitation pic and a sure bet for Zamora fans.


Posted by Films from the Far Reaches at 2:06 AM

Email ThisBlogThis!Share to TwitterShare to FacebookShare to Pinterest
Labels: The Phillipines