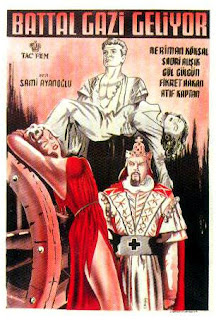 Ah, the joys of Turkish Pop Cinema. I first discovered this unique brand of cinema roughly ten years ago through the book "Mondo Macabro" by Pete Tombs. Until then, I had no idea that films were even made in Turkey, no less the amazing quantity that had poured out of there from the mid 60s through the early 80s. It took several more years for me to start tracking these hard to find films down but once I did, I was hooked... big time! Not everyone however, will share my enthusiasm. On a technical level, they are not "good" movies in the traditional sense. O.K. for the most part, they are terrible. Most appear to be shot almost guerilla style and contain camera work and edits that would probably make Ed Wood blush. They have little to no redeeming value whatsoever as "cinema". But what these films lack in technical knowhow, they make up for in sheer chutzpah. In all my life, I have never seen more energetic (or just plain crazed) movie making at any time, anywhere. On a bubble gum level, they are supremely entertaining. Everything in these films is played over the top in the most maniacally gleeful way possible. They ran the gamut from superhero adventures to period actioners to tough guy melodramas etc. One of the best examples of their period pics is this film, Battal Gazi Geliyor.

This film tells the exploits of a real life (and seemingly invincible) Muslim folk hero, played by Cuneyt Arkin, THE Turkish leading man, action star. Cuneyt Arkin was (I believe) originally a doctor who became a romantic lead in the 60s before morphing into an all out action star. The sheer number of films that this man appeared in is mind boggling. Most reports have it in the hundreds, but it could well be over a thousand. It literally seems like he's in 50% of all Turkish pop films made from the late 60s on.

The film plays like an Italian Peplum on 'roid rage. Though based on historic fact, it resembles something more like a crazed comic book version as our hero faces a black robed Catholic gang that's pillaging the countryside, taking time to nail hapless local women to crucifixes and laughing lustily while doing so (of course). Employed by the villains is a Viking-like character who uses a Trident to impale three people to a tree as well as an Asian martial artist who has an exciting duel with Battal Gazi near the film's climax. Battal shows off his prowess in brutish hand to hand fights as well as a supernatural ability with the bow and arrow. He also bounces over ten feet off the ground with ease, thanks to a hidden trampoline. The film does slow down a bit during it's second half as Battal's father (also played by Cuneyt Arkin!) is captured. But this allows our hero to don a disguise (which should have fooled no one, yet somehow fools everyone) in order to infiltrate the castle before doing some major stormin'.

Battal Gazi Geliyor serves as a perfect introduction to Turkish Pop Cinema in general and to the ubiquitous Cuneyt Arkin in particular.

Posted by Films from the Far Reaches at 12:48 AM